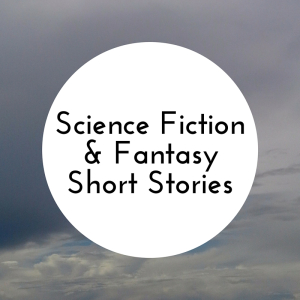 I read a lot in July: both zine/online short fiction and books. I also discovered an important life-hack: reading short fiction when you’re traveling long distances by plane is a most excellent way to pass the time in airports and on airplanes.

Here are 12 brilliant short stories I encountered this month:

The Big Bah-Ha, by C.S.E. Cooney in Apex Magazine. It is hard for me to articulate just how awesome, unsettling, and plain breathtaking this story is. It’s a reprint of a story that is included in Cooney’s short story collection “Bone Swans”, and it is an astonishing work of fiction. There is a bottomless pit of almost unbearable darkness here (such as: all the adults in the world are dead, only children survive… for now…), and yet the prose glimmers and sparkles and skips over that darkness, like a kid playing in puddles. The language is lush and weird and gorgeous, and the story makes me shiver and smile and cry, almost all at the same time. A standout work from an amazing writer.

Painted Grassy Mire, by Nicasio Andres Reed in Shimmer. This is a stunning story from Nicasio Andres Reed. A girl has just lost her mother and everything around her seems to be permeated by her grief and loneliness, as well as a strange and unnamed magic. Reed’s prose is so vivid that I swear I could feel the humid heat pressing down on me as I was reading. And the alligators… they are the stuff of both dreams and nightmares: “A gator was a solitary monster. A young girl in the marshes will find no alligator cities, no gator nations or schools, no broad alligator avenues, no matter how long she may look.  They were strict heathens. God formed them not to kneel, and so they worshipped nothing but the sun.” Unique and magical.

Helio Music, by Mike Buckley at Clarkesworld. Brutal, harsh, bleak, grim: that’s life for the girl in this heartbreaking and darkly beautiful science fiction story. The universe around her, is one where violence and war seem to rule everyone’s lives, and where people, even children, are used as killing machines (quite literally). There’s all sorts of scifi goodies: mind-blowing tech, space battles, psychic powers…but the focus is always on the girl, who eventually becomes something other than a girl, even though she still carries the pain and memories of childhood inside her. This story will haunt me for a while.

Red House, by Gavin Pate at Nightmare Magazine. This story is trippy, mind-bending horror at its finest. Pate takes a regular horror trope – abducted girl is rescued from horrible things – and turns the story inside out and upside down,staying with the girl after she’s rescued, pulling us into her thoughts and memories and nightmares and visions. It’s labyrinthine and strange, mesmerizing, bone chilling and truly terrifying – real horror that unsettles and makes your skin crawl.

El Cantar of Rising Sun, by Sabrina Vourvoulias in Uncanny Magazine. Imagine telling the stories of lives lived here and now, on the streets and in the houses and in the towns and cities we know, in the style of an epic story-poem. That’s what Vourvoulias does in this short story, and the result is brilliant: a fast-moving, dizzying, tragic tale with magic tattoos, rhymes, love, friendship, and death. The language is powerfully alive, swaggering and moving to its own rhythm and its own beat. Original and skillfully crafted.

So This, by Chloe N. Clark in Flash Fiction Online. I’ve been away from home and from our dog for a few weeks as I’m writing this, and that might be why this quiet and altogether heartbreaking (and heart-healing) story cut me so deep. A flash fiction gem.

Postcards From Natalie, by Carrie Laben in The Dark Magazine. This seemingly simple story deepens and darkens as Laben expertly unfolds it bit by bit. There’s a twist of sorts towards the end, but this is not a story that relies on its twist to be worth reading. It holds so much more: what it’s like to grow up in a small town, the relationships between two sisters and a mother… and then, eventually, as the story tilts and skews, another world is revealed beneath the world you thought you were looking at. Brilliant storytelling.

The Last Sailing of the Henry Charles Morgan in Six Pieces of Scrimshaw (1841), by A.C. Wise in The Dark Magazine. A short story that is essentially a detailed description of six pieces of scrimshaw might not seem like it would be much of a horror story. However, that’s exactly what this story is. Wise’s carefully and skillfully crafted non-fiction-ish prose reveals a growing darkness and deepening terror with every sentence.

The Cartographer’s Price, by Suzanne J. Willis at Mythic Delirium. There’s a mysterious map that can’t be sold to just anyone, and a mysterious customer who enters the cartographer’s shop wishing to buy it: “I know it isn’t for sale. Such an object must stay put until a worthy owner comes to claim it, no?” What a delicious tale this is, easily and effortlessly weaving in so much awesome world-building and character backstory, while also making even the scents and sounds of the fictional world come to life.  Excellent fantasy, with a romantic, dark-tinged flair.

Her Sacred Spirit Soars, by S. Qiouyi Lu at Strange Horizons. I’m a bit of a sucker for tragic love stories, and if you’re looking for a story to squeeze your heart and make your soul hurt (in the best way), then this scifi/fantasy love-story (with wings and a beak) is it. A bird is captured, two souls that were joined are torn apart… and that’s just the beginning. Lu’s writing shimmers and glows while telling a story that really cut me to the quick.

Scar Tissue, by Brad Preslar in AE. I love the twisted and strange vibe of this well-written science fiction story: it has a real golden-age Twilight Zone-feel that really creeped me out (that’s a good thing, of course). Whatever relationship therapy should be…it’s probably not this.

The Last, by Premee Mohamed in Metaphorosis. I love stories that commit wholly and fully to a radically crazy idea, and then carry it through with conviction, skill, and style. That is the case here. Semi-sentient icebergs and Morse-code using volcanoes in a post-apocalyptic sort of world? Yep. And yet this tale is also so much more: it explores a boy’s grief and and fear as he is forced to grow up too son. There’s fast-paced action and complex dynamics going on between two characters who don’t like each other, but who have to cooperate in order to ensure their own survival and the survival of their community. Great stuff: excellent world-building and engaging characters.