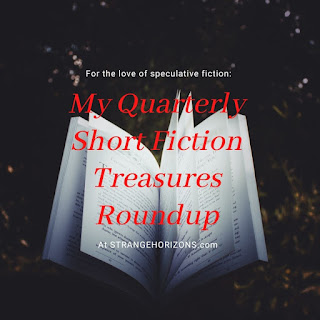 Stories, old and new and the unofficial / official theme is "arts, crafts, and work". 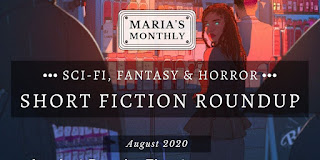 Let's dive right in, shall we?

The Bone-Stag Walks by K.T. Bryski in Lightspeed

Over cresting drifts comes the Bone-Stag, leaving no mark of his passing. Down in the village, they draw their curtains fast against him. They bolt tight their doors. Garlic at the lintels and holly upon the sills.

One of the most strikingly beautiful and powerful fantasy stories I've read so far this year. It's a visceral and dark twist on old fairytales, and I love every gorgeous, unsettling, riveting bit of it. You can feel the melody, the rhythm of the prose, in every sentence and paragraph, and the effect is mesmerizing. There are stories braided into other stories here, and as the truth at the heart of the tale is revealed, Bryski does not flinch from the darkness that lurks within all true fairytales.

The Cat Lady and the Petitioner, by Jennifer Hudak in Translunar Travelers Lounge

This is a story to lift your spirits on a bad day. There are cats (so many awesome cats!), there's a cat lady who is ANYTHING but crazy, and there is the petitioner who knocks on her door (three times, so she can't be ignored), and THEN there is the house itself, and the thin places where the universes connect, and well... you should most definitely read this story. It's life-affirming and funny and contains a most excellent (cat-assisted) adventure.

“You see this skin?” She tugged at her creviced face. “It slides away easier than a fresh bride’s satin nightgown. I fold it in my mortar and blaze like fire in the night. Then, I squeeze through the slits in your window sill, Farrah, and suck you dry.” She stretched her hands the width of her doorway. Clapped them closed, fixing her eyes on me, again. Needle sharp.

Palumbo skilfully weaves together horror and childhood memories and reality in this story, and then she twists that weave until the pattern you thought you saw turns out to be something else. (I love how the horror hides in plain sight here.) There's a simmering menace to this story from the start that really drew me in, and by the end? By the end Palumbo had me fully and completely on the hook.

Being from Trinidad, Caribbean folklore was a large part of my childhood. I grew up with stories about jumbies and La Diablesse. The figure that loomed largest for me however, was The Soucouyant. The idea of an old woman who could shed her skin and suck one’s blood kept me terrified and awake at night for at least a couple of years.

A short story that has the rhythm of poetry, this fiction piece by Naimon is both wrenching and sublime. The repetition, the sing-song feel of the telling, and the deep sorrow and loss contained in every sentence here is gloriously beautiful and utterly devastating. As the trees withdraw from the world, as they leave us behind, the already changing world is further changed and something priceless is lost. I love the imagery of the tree spirits communing with each other, and I love the audacious strangeness of the whole piece.

Elise goes into the woods behind her house and falls over her dead grandmother.

Elise sneaks into the woods behind her house and trips into the loamy concave of a grave the forest has sucked back beneath her skin. The crude headstone tells Elise that Mary Ann is buried here. No: the stone and its name are half-swallowed by moss and Mary Alice is napping in black dirt beneath Elise’s knees.

Elise goes home and says, “I found Grandma in the woods."

This is a dark and deep flash story about childhood and magic, and about a child who finds a way to get what she wants, and do what she wants, in spite of her mother's efforts. I especially loves how this story weaves fantasy, and a shiver of horror, into the everyday world of Walgreens, AA batteries, and muddy socks.

A Voyage to Queensthroat by Anya Johanna DeNiro in Strange Horizons

A brilliant and epic science fantasy short story about an old warrior who must revisit her own past in order to help save the present, and the future. And at the heart of this epic tale is the tense and deep relationship between an old warrior and her young protegé. Everything about this story--the scope, the exquisitely wrought prose, the blend of fantasy and sword battles and science fiction--is perfectly done. Please, can I have some more? It's also a story that reminds me of DeNiro's wonderful novella City of a Thousand Feelings.

Bobbie and Her Father by Gillian Daniels in The Dark

Oh my gosh. THIS STORY. It is a wrenching, horror-ifically funny, and devastating take on Frankenstein, all set in modern-day suburbia, and featuring the regular kinds of people that probably maybe live on any given street. Daniels's story twists and turns through unsettling scifi, to horror and dark comedy, into something that is almost (but only almost) heartwarming. At least for a little while. There's a lot of subtle and overt stuff happening in this story as it deals with the travails of parenting, the pain of adolescence, and the awkwardness of being human (or at least human-ish).

Sweet Sting by Sara Saab in The White Review

My job during the war was to administer beatings. This didn’t make me better than anyone else, particularly not the people I beat. To ensure that I never forgot this, I was periodically beaten myself. I, Laura Grimsey, a White, beaten quite roughly but within official boundaries by a Brown. A team of Browns was retained expressly for this purpose: to beat the beaters.

Saab's story, set in a future that seems both wickedly strange and sadly plausible, is a marvellously crafted scifi/dystopia. The way violence is used here to enforce and create unity, how it's used to both punish and reward, the way it shapes society to fit into a totalitarian mold... it's all so sharp and perceptive and the connections to our own present reality are everywhere. There's a hint of Orwell's "1984", and as this story reminded me, it's a good idea to read anything and everything by Sara Saab.

Horror that is so taut and tense that every sentence shivers with the threat of destruction and violence and pain. This story is freakishly good, both at capturing the internal turmoil of a man who is carrying around more memories and nightmares and pain than he can really bear, and at capturing the transcendent power of being able to express at least some of that turmoil to others. The wolf is just beneath the skin here, but the most beautiful moment in the story is when the howl is released.

This story takes place in a world where devotion to the Goddesses of Raagas has made it possible for people who have lived "a full life" to return after death as a "cloud portrait". This portrait then unspools itself into the deceased's soul song, filling the air "with the lilting music of their lives". Rajaji is a priest, fully committed to serving the Goddesses, and is also full of admiration and love for the soul songs, but his devotion pits him against his own mother, a scientist, who has very different ideas about this supposed blessing. This is a deep, contemplative, and quietly moving story that explores how we react to, and are shaped by, both the lives and deaths of the people we love. Uniquely imagined and wonderfully human.

We Have Evacuated, Have a Good Day by Jendayi Brooks-Flemister in Anathema

A story about a terrible storm, and a grandfather who lives alone and refuses to evacuate. I love how this story twists and turns through old memories, and through the grandfather's old house, as the storm worsens. There's a sense of something askew as we realize that the old man might have other things on his mind than just the wind and rising waters.

Tiger of the New Moon by Allison Thai in Anathema

Hoa, a young woman trapped in a harsh life under her father's thumb, enters the woods and meets "Ông Ba Mươi, Mister Thirty, the tiger with a taste for man’s flesh on every new moon". What follows once she meets that tiger is a monster tale that is also a love story. The horrors here are not so much of the beast's making, as of the humans in the tale. It's sort of a take on Beauty and the Beast, but also something much different as Thai blends fairytale and myth with the stark reality of being trapped in a situation you can't get out of... unless, perhaps, you have a tiger on your side.

A Wake For the Living by Jordan Kurella in Zooscape

A strikingly stark and beautiful story by Jordan Kurella in Zooscape. This is a post-apocalypse story told from the viewpoint of a vulture, enjoying the spoils of the end of human civilization. It's also a love story, and a story about jealousy and belonging, as the vulture feels a new and dangerous connection to a crow.

The crow was beautiful when she ate: all black sheen and viscera. Her beak slick with spoils as it tilted back, neck bulging, bulging with her quarry. The quarry meant for us. We vultures.

The Beginning by Radha Zutshi Opubor in Omenana

This is a haunting, heartbreaking tale of climate change, but told almost as a horror story, or maybe a ghost story.

I was born before the Beginning.

I remember my father’s house. Low to the ground and solid with a thick iron door: I never felt safer than when I peered out into the stormy night from behind my window bars.

A girl remembers the past: her family home, her father, her mother, the weather changing, the waters rising, people leaving the city of Lagos to find safer places to live. And then, devastation.

Dead Girls Have No Names by Claire Wrenwood in Nightmare

Mother keeps us in a chest freezer. “For preservation,” she says, and perhaps this is true.

Mother does indeed keep bits of dead girls in her freezer, and after sewing them together into something, someone, new, she has brought them back to life. That life is confused and splintered with memories submerged and emerging, and there is much violence and vengeance too as the dead girls help mother find men who have done, or might do, terrible things. What Mother really wants is for the girls to find the man who killed her daughter, but in the end, after the dead girls try very hard to do what Mother wants, they find another purpose. Chilling, deeply unsettling, and moving.

That's it for this month's roundup! Thanks so much for reading and/or listening!