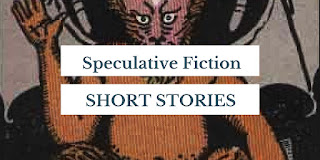 I’ve run out of adjectives! After calling the stories in this monthly feature everything from “intriguing” to “incredible” since I started posting roundups a year ago, I’ve decided to cut to the chase and just name the posts  “short fiction roundup”, since that’s what it is.

This month, for the first time, I am featuring stories from two publications that require subscriptions: Fiyah and Gamut. Both are brand new, and released their first issues this past month. I subscribe to Gamut, and was lucky enough to win a copy of Fiyah in an online draw. Both are excellent reads: Fiyah is a magazine of black speculative fiction, while Gamut’s focus is “neo-noir, speculative fiction with a literary bent”. These new publications have very different vibes, but both are well worth your time and money if you enjoy reading great speculative fiction.

I’d also like to give a shout-out to another new zine: Arsenika. Arsenika is a quarterly journal of flash fiction and poetry, and I highly recommend you check out their issue #0 online right now.

See Sky Sea Sky, by Chloe N. Clark in Syntax & Salt. “You said you fell through the sky but that it felt all right.” I love stories that take place in the real world, but twist that real world until it is so strange that you really believe anything can happen, even when you’re just walking home from work and happen to look up at the sky. Egg shells are crushed underfoot, and people are disappearing without a trace… There’s a quiet beauty and longing to this exquisitely crafted tale that really moved me.

Her Hands Like Ice, by KT Bryski in Bracken. “My older sister shone brilliant in the moonlight, brighter than the unbroken snow, and then she passed into shadow.” A vampire story? Perhaps. A ghost story? That, too…maybe. An older sister returning from the dead, a vampire hunter, and a younger sister in a house where the hearth is going cold. If you want to be chilled to the bone, then this story will definitely do the trick. The prose is gorgeous, and the tale is haunting, in more ways than one.

Black, Their Regalia, by Darcie Little Badger in People of Colo(u)r Destroy Fantasy!. “Tulli truly loved her buddies. She couldn’t envision better people to live with. To die with. Hopefully, the death part would take its sweet time.” If you ask me, there are not enough speculative fiction stories that feature bands playing neoclassical alt-metal fusion. This story has that. It also has drums, jingle dresses, a deadly virus threatening civilization as we know it, and a band (as in: a metal band) of somewhat unlikely heroes. ‘Black, Their Regalia’ is a fantastic, funny, and very well-told story that also has a terrific cast of friends, and I just love a story that gets friendship right.

The Dark Birds, by Ursula Vernon in Apex Magazine. ‘I heard the sounds of digging change and I thought of what the trowel might have struck. My throat felt as if it were closing up.
“Oh-die-will,” whispered the dark birds. “Oh-die-will.”‘ Vernon weaves together strands of fairytale and reality into something hauntingly strange and dark, and completely unique. Sisters who disappear, a mother changing their names, babies born and (maybe) buried, a father lurking below the floor… This story burrowed underneath my skin, crawling with the horrors that can hide inside families, when parents become the monsters.

In The Otherwise Dark, by E. Catherine Tobler in Three-Lobed Burning Eye. “But Dom remembers a longer life with his mother, a life of adventures and dreams, until November took that away. After, life became a series of gray days; of adventures tucked into trunks and boxes and stored in the attic.” Tobler’s prose is so good in this piece that it sort of makes me wish I could eat it. The story reminds me of Tove Jansson’s “The Invisible Child”, and takes place in a world where something vital is unseen by most people. Because of this inability to see, there’s an unspoken absence in people’s lives, but to acknowledge that absence is to be seen as somewhat crazy. I won’t say more than that, but I will say that the story deftly illustrates how society can warp itself when some people are overlooked and ignored.

The Universe As Vast As Our Longings, by Benjanun Sriduangkaew in The Jewish Mexican Literary Review. “When you look at your past, it is as though you’re peering into cracked quartz. What you were before is separate from you, an earlier instance.” An intricate and powerful story about identity, family, love, and growing up without losing yourself. The protagonist of the story, the voice of the tale, is fierce and brilliant, an outsider in a strange world (our world, sort of). For me, the story raises questions like, how do you hold on to what you are, who you really are, when the world tries to shape you into something else? How do you hold on to love when you find it? This story is so deep, and so good. A must-read.

The Bubblegum Man, by Eric Reitan in Gamut. “Valerie and I met the Bubblegum Man on a sweltering summer day that never happened. But I can’t think about that too much, what happened and what didn’t, or I’ll go crazy.” This dark and almost hallucinogenic story about two siblings and what happens to them in a world full of adults who are too selfish or far-gone to take care of them, shook me. It is deeply unsettling, with a creeping, crawling sense of dread permeating every word from the first to the last paragraph. And the ending…well, let’s just say it’s one of those stories where you wish you could go back to the beginning and warn everyone involved…

Love Story, An Exorcism, by Michelle E. Goldsmith in Gamut. “Holding dead still, you let the earsplitting song of the cicadas in the trees above reverberate through your skull, begin to transport you. Amy’s fingernails dig deeper into the soft flesh of your wrist. You try not to react.” This story captures the terror and pain and dependence of dysfunctional childhood friendships so well: that sense of needing someone, wanting someone to be your friend, and at the same time hating that you need them. There is terror and uncertainty here, wrapped up in pain and friendship… making for a mesmerizing story that left me with a sense of vertigo. And the ending? It made me read the story over again. Brilliant.

Revival, Wendi Dunlap in Fiyah. “It’s midnight and I can smell the new moon through the cracks in the concrete. This organism in my womb has heightened my senses in unnatural ways.” A pregnant woman is surrounded by people who fear both her, and the offspring she carries – is it human, or is it something else?  Dunlap’s story is set in a far future where human beings have settled on another planet, and it deals with questions of choice and freedom and change (even evolution). I loved the way the story plays around with our expected notions of alien worlds and alien-human interaction. An excellent read.

The Shade Caller, DaVaun Sanders in Fiyah. “I have an urge to cast aside my tattered body shroud and taunt them, finally, as an equal, but it won’t do for a flash of pride to stir Mother Night’s displeasure and invoke my madness. Not this night.” Some short stories are so original and have such a hook, that they make you yearn for the tale to be continued in novels (or at least more short stories): this is one of those stories. The society and the people are captivating, and the story is rich in depth and complexity, exploring themes like persecution, how society attempts to control (or eradicate) those who are different, and the way that oppression shapes both the oppressed and the oppressors. More, please!

Seven Salt Tears, by Kat Howard in Lightspeed. “My bones are corals beneath my skin. Here, here, here, I tell the ocean. I am coming.” H0ward’s story is a beautifully spun fairytale of ocean and storms, mother and daughter, mermaids and selkies, longing and belonging. I love how the story intertwines ideas about love, specifically how we tend to change ourselves when we love someone, with the fairytale themes of magic and shape-shifting.

The Ghost Ship Anastasia, by Rich Larson in Clarkesworld. “Silas wanted to remember the last time he’d hugged her, but cryo had a way of churning memories together.” A fantastic and gripping science fiction story about a man who loses his sister on a rescue mission to a very strange, malfunctioning spaceship. I love the original setting: the ship the crew has been sent to investigate is uniquely imagined, and the idea that people can be “reincarnated” by downloading their memories into newly crafted bodies.

Shadow Man, Sack Man, Half Dark, Half Light, by Malon Edwards in Shimmer. “When you arrive, you can ask Manmi to look at your heart. After all, she did design and build it.” Hope and horror and family are interwoven in this fabulous tale set in “a dystopian steampunk Haitian Chicago city-state” (quoting Malon Edwards on Twitter!). The prose is so good I want to read the story again and again, blending Haitian Creole seamlessly into the telling of the tale. (If you want more of Edwards, read his solarpunk story “Long Time Lurker, First Time Bomber” in Fiyah.)