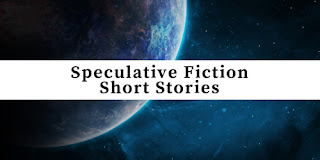 Another month’s gone by, full of amazing short fiction. I gathered up 10 of my favourites at B&N’s Sci-Fi & Fantasy Blog:

And here are 10 more stories from around the web. Gorgeous, haunting, wonderful creatures each and every one.

Dustdaughter, by Inda Lauryn in Uncanny Magazine
“They made us fear our own power, like we had no right to it. Made us believe we were better off without it. That’s how they keep winning. We do it to ourselves, strip away the pieces they don’t like ’til they none left. Then tell us we not whole, so not good enough.”
Dust knows she is different than other people, than other kids. She knows people find her strange. She also knows she can do things, and when something happens at her Big Gram’s funeral, things are brought to a head. This is a deep and subtle story, about a child who knows she is different from what people expect her to be, and who finally might have found a place, and people, who allow her to be what she is. There is magic here, and cruelty, and love, and hope that things can get better.

Adrianna in Pomegranate, by Sam Mills in Beneath Ceaseless Skies
“It is far better to teach by speaking, to practice by doing. Wise magicians maintain an oral tradition and leave the textbooks for historical storytelling. Wise magicians know that writing changes the world.”
This fantasy store is so exquisitely crafted I could read it for the rhythm and melody of its prose alone. It’s about a place where words written down  are the magic, and the choice of ink and paper and writing implement affects that magic. In this world, a man crushed by grief and regret is trying to bring back what he lost. It is a wonderfully moving and darkly luminous story that is the kind of story I will keep coming back to more than once.

The Crafter at the Web’s Heart, by Izzy Wasserstein in Apex Magazine
“When I was little, I’d lay in Ma’s arms and listen to her stories. Beneath us, the web swayed so gently, you could almost forget it was there. Now Ma’s tongue is a tangle of vines, and I’m the one telling the stories, but the web still vibrates, still speaks, if you know how to listen.”
The city of Traverse, the place where Izzy Wasserstein’s story takes place, is located on top of an ancient web of fantastical proportions, and the magic used here slowly transforms the magic users over time. Wasserstein’s story follows Danae, one of the city’s inhabitants, as she is tasked with delivering a package, and it’s the kind of nuanced fantasy tale I love to delve into. I love the depth and detail of this world, and it made me wish for a whole book set in the same place.

58 Ways to Ensure Your Husband Loves You Forever, by Rafeeat Aliyu in Nightmare
“I’m okay.” Outside the bungalow, Iman paced. “. . . but I’m not sure about Kevin. He tried to eat me this morning again. It’s like he’s a zombie.”
Oh wow. I’m not even going to try to describe this story too much, except to say that it is an absolute TRIP. It perfectly blends advice-column-type tips with the disturbing reality of what our protagonist has done in order to ensure her husband does love her forever. Visceral, gut-wrenching, chilling, and with a sly, dark sense of humour, this is excellent horror.

Rust and Bone, by Mary Robinette Kowal in Shimmer
“Grandmother’s rocking chair is made of iron. It is rust and death and blood. Grandmother’s rocking chair sits in the middle of the porch so that she can watch me and pet her turtle. Tortoise, really. It is as old as Grandmother and waits patiently by the chair like an end-table of shell.”
The last issue of Shimmer is a treasure trove of excellent fiction, including this dark and twisting tale of magic, family, and finding out who to trust, and where you are safe in a dangerous world. The magic in Kowal’s story isn’t glossy and sparkly. Instead, the tale has a gritty, grimy fairy-tale vibe that is both unsettling and compelling. And, like in many fairy-tales, a child encounters terrible dangers here, and has to figure out how to navigate the world and save herself.

Safebuoys, by Wes Smiderle in Flash Fiction Online
“For 247 sleep cycles, the safebuoy has been drifting. The only window is a round, pillow-shaped patch of transparent steel. Loocha tells her son, Corvey, there’s nothing to see, and he believes her. Until the giant ice cream cone appears.”
I love flash stories that manage to do serious world-building and give you characters you care about, and also pack in a whole lot of emotional power – all in less than 1,000 words. Wes Smiderle does all that in this quietly devastating science fiction story about hard choices, survival, and a very small family.

Quilting With the Rejects, by Megan Lee Beals in Flash Fiction Online
“All used fabric had vibe, and even Goodwill discards knew love once. A SeaWorld tee-shirt with a hint of nausea in the seams, a handknit sweater turned to felt in the washing machine, a Halloween costume torn when its wearer was caught TP-ing a neighbor’s house.”
This is a highly original, uniquely imagined flash story about the magic of fabrics (scrap fabric to be exact), and the skill and craft you can employ in order to make an impression and affect yourself and others. I love the idea of this story, that scrap fabrics carry a certain emotional content, the vibe, of the clothes and items they were used in before.

Mean Streak, by L’Erin Ogle in Metaphorosis
“I hear the softest voice that night, lying in bed. It’s her, talking to herself, but I can’t make out what she’s saying. There’s a sound accompanying it, something that could be mistaken for crying, if I didn’t know that witches don’t cry.”
In “Mean Streak”, L’Erin Ogle tells the story about a society where people hunt down and hang witches. When Winnie’s family finds a woman beaten and almost dead, her dad takes the woman in and helps her, even though they all know she’s likely a witch. What follows is a deeply unsettling, gripping story, told from Winnie’s point of view, and her point of view is uncomfortable because she has so much anger and pain and, yes, meanness inside her. The result is a powerful and dark story, and Ogle’s writing keeps you hooked even as you squirm.

The Soul Farmer’s Daughter, by Kyle Kirrin in Metaphorosis
“Thirteen souls flit about in mason jars on the mantle above my workbench. They’re bright—luminescent, even—but they’re not potent enough for the Duke.”
Kyle Kirrin’s story about a father and a daughter and the quest for souls with greater power, is a harrowing read. Kirrin fits a whole lot of deft world-building into this short story, crafting a world of machinery and pain, terror and deception. There are automatons, souls in mason jars, dirigibles, and a father who sends his daughter on a terrible quest, knowing full well what it will cost her, and him.

The Boy From the War, by Perrin Lu in The Future Fire
“In the end, all she said was, “Mother, I’m back.”
Kuroba Yuu, three years dead and buried, could not reply. Unspoken, in the silence between them, lay two unmarked graves in the faraway east, for a father and brother gone to war and never returned. Three years ago, when she’d made her last offerings, she had not believed she would live to come back.”
This whole issue of The Future Fire is a treat, including this novelette by Perrin Lu. It’s a quiet, subtle secondary world fantasy story that doesn’t come at you with a lot of flash and bang, magic and spells. Instead, it’s about what happens when someone comes back home after the war and finds that they can no longer be who they once were, but aren’t quite sure how to fit into a new life in an old place. Beautifully written, this story stayed with me long after reading.