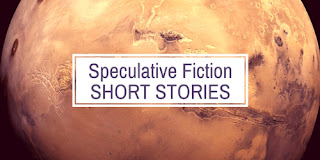 Honestly, August passed in a bit of a blur. I was writing a story that had to be finished by August 31, and the kids were still out of school, so there was a lot of stuff going on. But, yes, there were still so, so many good stories to read.

Right before I put together this month’s roundup, Augur Magazine published their preview issue. This is a brand new Canadian magazine of intersectional, speculative fiction, and it is definitely worth checking out. The preview issue contains wonderful reprints by a range of fantastic authors that gives you a taste of what this magazine is all about. Augur is also running a Kickstarter campaign – so if you feel like supporting a new, pro-paying, Canadian-based venue… head on over and invest a few bucks.

The Lamentation of Their Women, by Kai Ashante Wilson at TOR.com. “They loped like winter wolves, thin yet, but bellies hanging full of fresh kill, and future tooth and scenting nose toward all these little lambs gamboling on every side.” Fierce, brutal, sexy as hell, action-packed like a pulpy Hollywood movie (but better), and devilishly dark… this is yet another masterpiece from Kai Ashante Wilson. The way he mixes high and low, street and Shakespeare, brutality and beauty, the sexy and the savage… I am honestly in awe. This is a powerful and passionate story that deals with race, police violence, and racism. Read it with his harrowing ‘The Devil In America‘ for a gutpunch of prose.

If a Bird Can Be a Ghost, by Allison Mills in Apex. “Shelly’s grandma teaches her about ghosts, how to carry them in her hair.” I love this story so much it makes me hurt. I have a weakness for stories that manage to break my heart, and then stitch it back together, and this is such a story. Weaving together magic and spirituality, life and afterlife, childhood and adolescence, grief and family – with all its guts and glory – this story is both haunting (in more ways than one), and deeply moving. A must-read.

Welcome to Your Authentic Indian Experience™, by Rebecca Roanhorse in Apex. “What Theresa doesn’t understand is that Tourists don’t want a real Indian experience. They want what they see in the movies, and who can blame them?” Another brilliant story from the August issue of Apex – this one is sharp and incisive, chilling, and darkly funny to boot. Using virtual reality and the often misguided longing for “authentic” experiences as a starting point, Roanhorse expertly explores issues of stolen identity and stolen culture. This is one of those stories that works its way deeper and deeper into your mind after you read it.

Never Yawn Under a Banyan Tree, by Nibedita Sen in Anathema. “Never yawn under a banyan tree….A ghost might jump down your throat.” Fair warning: there is so much delicious food in this story that it will probably make your mouth water. It is also wickedly funny as it deals with family, unladylike behaviour, sexuality, and a very hungry, and seriously food-loving ghost.

Eruption, by Jaymee Goh in Anathema. “You will grow out from under the aegis of the Founding Mothers in due time.” What a fierce and fiery and deeply unsettling story this is, set in a society where the women once, not too long ago, made a hard choice, and carried it through to its sweet and bitter end. They changed the world, and were changed in turn. Beautiful, powerful, and heartbreaking.

For Now, Sideways by A. Merc Rustad in Diabolical Plots. “There’s never been a tomorrow since the war began.” Rustad’s story is a masterpiece of small-scale space-opera – its prose honed to perfection – and populated by scarred survivors of war, mech-bods, and soldiers who can no longer remember who and what they were before the war began. Masterfully done.

Skins Smooth as Plantain, Hearts Soft as Mango, by Ian Muneshwar in The Dark. “The beast in the folds of Harry’s gut had no heart and it did not need one…” A horror story and love-story (of sorts) folded one inside the other, I love the way Muneshwar brings both the beauty and horror of Harry’s world to life. It is a visceral, deeply unsettling story and the prose is so vivid you can almost feel the beast touch your skin…

The Broken Karwaneer, By Jeremy A. TeGrotenhuis in Beneath Ceaseless Skies. “Where she found goodness, she would protect it. Where she found cruelty, she would resist.” Set in a harsh and unforgiving landscape where violence and death lurk at every turn, this tale packs a big emotional punch, and also features some very rich and evocative world-building. The children at the center of the story suffer so much hardship, but I love how they still come across as headstrong and complex individuals. Also, this story has an ending that definitely left me wanting more (in a good way).

Red Bark and Ambergris, by Kate Marshall in Beneath Ceaseless Skies. “She had survived sixty poisons. She was thirteen years old.” A beautifully told story of vengeance and loss and family and longing, and  of how difficult it is to be true to yourself in your heart of hearts. The world of this story is alive with details – scent, taste, emotion, colour – and Marshall brings everything so close you feel you might be able to touch it.

The Moon, The Sun, and the Truth, by Victoria Sandbrook in Shimmer. “Truth-running kept Andy moving, employed, and fed, but she wasn’t sure it was worth not seeing the near side of forty like Mama had.” A weird western of sorts, this story takes place in a world where truth-runners earn their keep, and risk their lives, by smuggling data from one place to another. Danger lurks everywhere in this suspenseful tale, and it also explores the longing for safety and a place to belong, even when the world seems to make such dreams impossible. Highly recommended.

Ink, by Bruce McAllister in Lightspeed. “…the things he collected did not make him bleed, when so much of the world—the sharp, angular things of it—did.” This exquisite story has a wonderful quiet power. It is set in a beautifully described real world and real place, and then, little by little you feel the edges of that reality tremble and waver… Gorgeous prose and the kind of story I read twice just to catch all its subtle nuances.

Tongue, by Ashok K. Banker in Lightspeed. “He is very good man. Only hits when absolutely necessary. We are very happy together.” Gripping, troubling, and disturbingly entertaining, Banker tells a story of “traditional” marriage in a future world. He eviscerates and skewers the expectations of what a wife is expected to endure and sacrifice for the sake of her husband and marriage. I love the way the story weaves together old prejudices and new ways of enforcing the patriarchal order. Brilliantly done.

These Constellations Will Be Yours, by Elaine Cuyegkeng in Strange Horizons. “We were the future galleons of our Empire and ours was the fate of starlight.” Cuyegkeng’s prose is so beautifully crafted that she spellbound me from the first sentence of this story. Wrapped in that exquisite prose, is a fierce tale of pain and suffering, and about what price a society is willing to pay for progress and profit and glory. The dark secret at the heart of Le Guin’s “The Ones Who Walk Away From Omelas” whispers through this tale, but Cuyegkeng also manages to pack an epic space-opera, and some truly excellent world-building into the tight space of a short story.

Oven Game, by Paul A. Hamilton in Metaphorosis. “Opening an oven from the inside is difficult…but Drea Kane has had practice.” I have a thing for stories that start off in a completely unexpected way. This one definitely does. The rules of the oven game are thoroughly bizarre and highly unsettling – crawling into people’s houses through a strange door / portal that leads from Drea Kane’s own home into other homes. I don’t want to give anything away, but suffice it to say that I was hooked by this weird and creepy story that has made me somewhat suspicious of my oven and my dryer…

The Waduf, by Naru Dames Sundar in Kaleidotrope. “I prepare my fictions…prepare my bulwark of story to hold back the Waduf’s power…” Oh my gosh, what a wonderful story this is – rich and luscious language, a uniquely imagined antagonist, and a tale that explores storytelling as a form of battle. Brilliant and original.

The Stone Weta, by Octavia Cade in Clarkesworld. “Resistance was revolution, sometimes, blood and dramatic acts, but more often it was survival.” This is a unique and powerful story about science and resistance in a world that is hostile to science, research, and the truth. Sound sort of familiar? Yeah, this story definitely hits home. Cade shifts the story’s POV from one resistance fighter to another, all of them named after various creatures – the stone weta, the resurrection plant, and so on. The way Cade uses the description of each creature to introduce the characters is frankly brilliant. I was quite happy to find out that  Cade is working on a novel rooted in this short story.

Four Hours of a Revolution, by Premee Mohamed in Pseudopod. “Rebels, like vampires, prowl by night, sleep by day…” A story of war and rebellion, told from the perspective of… Death. Death tells us who it has come to claim from the very beginning, but even so, Mohamed twists the suspense and horror tighter and tighter as the story progresses. This is a well-crafted and harrowing tale of struggle, betrayal and the price paid for revolution.

Cassandra Writes Out of Order, by Andrea Tang in Podcastle. “I only write prophecies. I don’t know how to change them.” I tend to love stories told out of order, and this one uses the form to great dramatic effect. Life is definitely not easy for a girl who writes prophecies that have a tendency to come true… What I love the most about this tale is the interaction between the children / adolescents at the heart of it. Their dialogue is sharp and vivid, and their relationship is achingly wonderful in all its well-crafted complexity.

Plain Jane Learns How To Knit Worm Holes, by Wendy N. Nikel in Flash Fiction Online. “No wonder Jane dropped the stitch and opened up an interdimensional wormhole.” When crafting goes interdimensional, you know you’re reading a good story. This flash piece by Nikel is a treat, and is packed with religion, knitting jargon, and time travel.

On Light and Shadow, by L.L. Madrid in Gamut. “Did the voice come from something lurking in the cracks of my mind or the house?” If you’re a parent, you’ll know that bercoming and being a parent is great fodder for horror. L.L. Madrid’s story resonates with me on so many levels: it’s brilliantly written horror set in the everyday world, a world that is slowly twisting out of true for the main character. This story also explores the fears and insecurities of motherhood with an unflinching eye. Unsettling and dark, this story swallowed me whole.