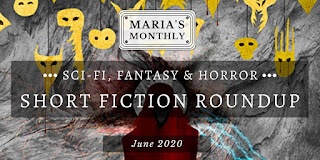 In addition to the stories featured in this June roundup, I also recommend the stories from my Short Fiction Treasures column at Strange Horizons, including:

An evocative story that is both dark and hopeful, weaving together the big, real-world disasters we all watched on the news with the more private tribulations and triumphs of pregnancy and childbirth. Hester's prose is fluid like a poem and makes every emotion, every pain and joy pierce you through and through. I love how this story captures the blended fear and exhiliration of becoming a parent and how it avoids any and all sentimentality.

Two Truths and a Lie by Sarah Pinsker at TOR.com

Something about it—the wooden cabinet, or maybe the dial—made her ask, “Do you remember The Uncle Bob Show?”

Which of course he didn’t, nobody did, she had made it up on the spot, like she often did.

Which was why it was so weird that Marco said, “Yeah! And the way he looked straight into the camera. It was like he saw me, specifically me. Scared me to death, but he said, ‘Come back next week,’ and I always did because I felt like he’d get upset otherwise.”

Stella goes back to the town where she grew up to attend a funeral. The recently deceased is the brother of one of her childhood friends, and she volunteers to help him clean out the brother's house, not realizing the brother was a serious hoarder. While going through the detritus of the brother's life, Stella does something she's done throughout her life: she makes up a lie and casually slips it into conversation, but this time, strangely enough, the lie seems to be exactly what really happened. Pinsker's story wormed its way into me and chilled me right to the bone by the end. It is fiction that feels like the underbelly of a nightmare, like the feeling that maybe, maybe, you've dreamt your entire life, or someone else is dreaming it for you. Unsettling on a deep level.

A haunted house story that will warm your heart and make you feel better about hauntings and ghosts and the general idea that a house might be able to both close, and open, doors all by itself. This story about a small family looking for a new home and an old house looking for a new family is an absolute gosh-darn delight.

True In His Fashion by E. Catherine Tobler in Three-Lobed Burning Eye

Taken as they are with their own needs, no one truly notices me. It is often the case and how we are so often able to prey on people in public. As one might gather the pleats in a skirt, one might also gather shadows into a corner, so that a neck can be exposed.

A lush and rich tale of vampires, love, desire, and loss. It is also very much a story about FASHION, and the texture and colour and feel and look of fabrics and thread and ribbons, gems and pearls. It's a feast for the senses... and for your emotions. Let this gorgeous and dark tale that spans centuries utterly beguile you with its prose and its finely drawn characters.

If you want a bit of warmth in a cold world, then you must read this sweet and subtle tale about a young man helping an older man do his laundry. Urbina wraps together an entire epic of sorrow and grief, empathy and kindness in a small story with a big heart.

I love reading stories about siblings, whether the relationships depicted are good or bad or, well, complicated. This story concerns a complex and complicated relationship between Mindi, who has leukemia, and her younger sister. It's a relationship that is fraught with tension and pain, but also shot through with a whole lot of love. Delving into the reality of sickness and grief and loss, Gray's story is stark and full of cutting edges, and it feels true in a painfully glorious way.

Nothing like a dog story to tear at my heart, and this one, about an old dog facing the end of its days, is a doozy, digging deep into how important a relationship with a dog can be. AND THEN the story takes a rather unexpected turn and ends up doing something more as it explores the bond between dogs and humans. I was sniffling by the end, but it's a good cry. Even if you don't like reading about dogs in peril, this one is worth checking out.

The Present Only Toucheth Thee by Kathleen Jennings in Strange Horizons

Mortality was never my besetting weakness, but here are some creatures you have been:

A doe, milk-white, grazing near my cave one evening. Your hide would become the cover of this book.

A lamb, incautious, of whose skin I made the first parchment-page.

The pine (which fell before the doe was born) whose resin yielded soot for my ink.

Three lives, single-souled, to supply my pen. Although I have forgotten the language I wrote in, I can guess the meaning, for what does any man write, except I am here.

Oh my goodness, what a gloriously strange tale this is. A book with a magic all its own, tying together two souls and two very long lives. Jennings writes with exquisite style and flair, as we follow two individuals through time and through the world, finding out how chance and/or fate has entwined them through their very long existence (whether in the same bodies, or not). Evocative and beautiful in every part.

First published in Nine Bar Blues: Stories from an Ancient Future, and reprinted in the Fund Drive issue of Strange Horizons, this story by Thomas is a dark gem with sharp edges.  it is a story of spirits and ghosts , violence and transformation. The prose sings and flows like a poem. Read it, and listen to this voice:

“We didn’t want your nail clippings or your blood. Your laughter, or tears, would do. That strange light you saw drifting where a shadow should be, was the promise mother made when she bore us. Where we lived, there would always be sun. Where we go, there would always be light. That star never scarred or scared us. Even in the face of our father, the sun’s blistering gaze, we were the daughters of night.”

Knock, Knock Said the Ship by Rati Mehrotra in The Magazine of Fantasy & Science Fiction July/August 2020

A science fiction story featuring not one, but several knock-knock jokes? Yes, indeed. In Mehrotra’s story, a sentient ship with a funny-bone and a traumatic past has bonded with a crew member who also has a traumatic past. Now, the ship is about to be boarded, the crew is in danger, and as it turns out, knock knock jokes can come in rather handy in a tight spot. A fantastic, funny scifi story where you feel the depth of the deft world-building right beneath the surface.

It’s hard to think of how to properly describe this story without making it sound absolutely bonkers. It is bonkers! And it's also rather amazing. It features very odd taxidermy in a post-apocalyptic setting, and it is a strange, deeply unsettling (even creepy), AND emotionally powerful story about people trying to find ways to stay alive and process a world where most of the people are dead, and the animals are not all quite animals anymore. Surely one of the strangest stories I read last month, and also one of the best.

“They had trapped her with symbols and salt, and enveloped her in chains of ivory smeared in holy water. In whispers, she was a witch, an alchemist who had been flushed out of her smelly hole. But she carried no wand, and certainly no tools with which she could fashion any sort of sorcery upon us.”

A story, told by a prison guard, wrapped in dreams, woven into another story that twists itself into the waking world... Srivatsa’s story is a rich and lustrous tale and by the time I finished reading it, I went right back and read it again. There is a striking, lush beauty to Srivatsa’s prose, as we are told the story of a prison and of Kalmashi, who is brought there as a prisoner of the emperor.

Those We Serve by Eugenia Triantafyllou in Interzone #287

A quiet, tender, and achingly piercing story about life and love and memories, about what it means to be human, and what makes us real—to ourselves and others. On a Greek island, copies of actual humans do the jobs no one else is there to do. Manoli carries the memories of “original Manoli”, but is fully aware that he is only a copy: not a real person, not free to leave the island, incapable of living a real life. Or is he? Beautiful, sad, and ultimately, hopeful.

The Stonemason by Danny Rhodes in Black Static #75

A stonemason works on a statue in a church, and as his work progresses, he increasingly feels watched by a malevolent presence, while the statue he is creating never seems to take the shape he wants it to have. Rhodes’s story is a masterfully written piece of horror, weaving together the stonemason’s memories and past with the craft of shaping stone. I love the atmosphere of dread that permeates this story, and the way the darkness deepens as the tale is told, tightening the vise on the reader bit by bit. This is my kind of horror, tying together an already present internal darkness with external terror.

Dresses Like White Elephants by Meg Elison in Uncanny Magazine

The way a man holds a dress changes completely if he’s worn one. Watch a man handle a dress without knowing how one works, or how much power is in it. Watch him bunch it in his fist like its structure means nothing to him; see him treat it like laundry.

This is a story that explores the use, and power of magic in an unexpected place--a place where Beni, a drag queen, is looking to acquire a dress. There is so much I love about this story--the intense personal connection that happens at the end, and the salty language, for example--but maybe what I love best is the way Elison makes you see and feel, and almost hear, the rustle and texture and sheen of fabric, and how intimately she writes about sewing and clothing, fashion and fabric.

Five Reasons for the Sign Above Her Door, One of Them Unspoken
by Izzy Wasserstein in Abyss & Apex

It's a slight cheat to include this piece of fiction since I read it in July, but I'm late with this roundup, and I want to include this finely wrought and fierce story anyway. Lilith is a chimera, and she runs a hostel for others like herself who are not always welcomed or even tolerated in society. She is used to people coming to her hostel as voyeurs, or to attack the residents, and she will have none of it. Read this for the fire beneath the words, and read it for the prose that sings on the page.

This is fantasy with an edge, and Wasserstein has written a must-read essay about the origins of this story: I am Invisible: Trans Communities and the Cis Gaze.

“I wrote this story to respond to the voyeurism of the cis gaze, but also to explore the spaces trans folks make for each other, the bits of ground in which we see, support, and protect one another. The spaces where we can hold each other (apart)/(up)/(together).”

First published at Curious Fictions. Art is a detail of the cover art for Three-Lobed Burning Eye #31 by Rew X.