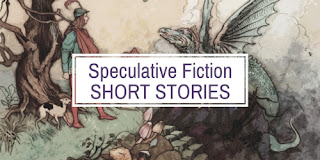 August was a cornucopia of wonderful speculative short fiction. I know I say that every month, but only because it’s true.

There are so many fabulous speculative fiction zines out there, and if you read some stories you love, go ahead and support the publication/s. Check out their Patreon, buy a subscription directly or via Weightless Books or elsewhere. Throw some coins in the tip jar, or buy a single issue. This helps zines keep going, it helps writers get paid, and it helps readers find great stories.

This month I want to make special mention of a couple of publications:

For Southern Girls When the Zodiac Ain’t Near Enough, by Eden Royce in Apex
“Hmm, a Southern gal. I don’t need your star sign. The ones you know are not for us.” After that, the woman reading the cards in Royce’s wonderful story proceeds to read the 12 cards in the Zodiac spread as she puts them down on the table, one by one. Royce’s story (part of Apex Magazine’s special Zodiac-themed issue) is a rich and lush tale, full of life and wisdom, joy and sorrow, the sweet and the bitter. It’s a story of hard-earned wisdom, deep and complex like life itself, and it’s a story that might just make you feel better when you read it (I know I did).

The Pull of the Herd, by Suzan Palumbo in Anathema
There’s a doeskin hidden in a cedar chest, and outside, in the woods beyond the town, deer-women slip their skins off together. Agni was once one of them, is still one of them, maybe. Except, she has never been able to slip the doeskin on as easily as the others. What a sharp and beautiful and aching story this is. When the herd is threatened, Agni faces some hard choices. Palumbo writes perceptively about how hard it can be to fit in, about being stuck between two worlds, torn by love and belonging on either side. About always feeling incomplete and full of longing, no matter where you go.

The Fainting Game, by Nino Cipri in Pseudopod
A chilling, spine-tingling, expertly written horror story written by Cipri, wonderfully narrated by Larissa Thompson. “I always felt like I was on the verge of disappearing when I was a child…” Maya feels like an outsider even in her own family, and Cipri perfectly captures the feeling of being on the outside looking in, and how savage children (even siblings) can be to each other. At a party, Maya and some other children play a game, making each other faint before they are brought back, experiencing a strange sense of euphoria. Except when Maya goes under, something goes very wrong and while she gets out, nothing is quite the same… From there, the tale twists deeper and darker and stranger with every step.

She Don’t Fade, by Die Booth in Vulture Bones
A piercing, moving, haunting story about change and what lingers afterward. Booth’s flash story is the kind of story that slips into your mind and stays there. (CW: use of deadname/birthname). Booth’s prose is lyrical and gorgeous, and this flash story was one of many fantastic stories in Vulture Bones #2.

Orphan Tsunami Heathens, by Tiera Greene in Strange Horizons
In Larchmont City, things are changing. After the city was hit by a giant wave some years ago, part of the city is now submerged, and some of the people are changing too – for example, they grow gills when they’re in the water, and they hunger for something other than regular food. Klein has just returned home to finish college and is trying to fit in and find new friends, but the hunger, and the changes that have taken place inside her and in the city, have left a mark. This is a dark and powerful story that took me somewhere unexpected. A brilliant read.

The Wyvern Rider and Those of the Land, by Jeremy A. TeGrotenhuis in Beneath Ceaseless Skies
This story in BCS is one heck of a ride, brimful of fantastic characters and terrific world-building, skilfully packed into a fantastic adventure about battles, magic, scores to settle, new friends and old foes. I love the characters so much in this story, they’re such a wonderful bunch, imbuing this highly original story with a sense of both fun and danger, and turning this into a story that grabs you from the first paragraph.

All the Colors I Cannot See, by L’Erin Ogle in Metaphorosis
As a child, Grace sees colours everywhere around everyone she meets, but after she meets a man with no colours at all, everything changes. This is a fierce and devastating story about magic, about fear and shame and trauma, about family, about how parents and children sometimes hurt each other, even when they don’t want to. Ogle keeps the story sharp as a razor, showing us how sometimes, things break and can’t be mended again, even if you try your hardest. A complex and layered story that knocked the wind out of me.

Cold Fish, by Anjali Ravi in Liminal Stories
A strange and tense story about two sisters digging in the dirt, stuck in a hole, and how they survived (and didn’t), and how they escaped (and didn’t). This story floored me. To me, it’s a story about doing what you need to do to save yourself, about the damage done, and about how even when you try your hardest to make a life for yourself after you find a way out, even when you try to forget what has happened to you, a sliver of darkness can stay inside you.

If It Were True Owls Dream, by Jan Priddy in Liminal Stories
Priddy’s story is dark and unsettling, and surreal in a way that made me feel like I was reading a dream (or nightmare). A group of children change into owls, or maybe they’re owls changing into children? The adults don’t understand what’s happening, or can’t face the reality of what is happening. Eventually, the children don’t change anymore, and there is an even deeper sadness in that:  “The years pass and perhaps the dreams end. They appear to end.” It’s a story that spoke to me of the strangeness of childhood and adolescence, of being different, and how hard it is to remain what you really are. Beautifully written.

When Leopard’s-Bane Came to the Door of Third Heaven, by Vajra Chandrasekera in Liminal Stories
What if people could go to heaven, or even had their choice of several heavens to go to, any time they were ready? This story imagines such a world where it’s possible to open certain doors in certain towers, and immediately join god on the other side. Sounds good? Or does it? Two people guard the door to Third Heaven and there, between them, something happens that might change everything. One of the many things I love about this unique story is how everything in the world (except the heavenly doors part) seems so very everyday and normal on the surface: the people and the world around the towers is much like ours, and yet the presence of the doors affects the world and everyone in it in a profound way. This story poses some really deep questions and the answers are not clearcut or easy.