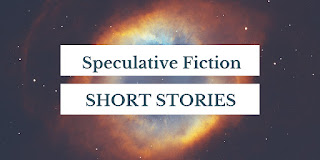 This month, like every month, I read a lot of amazing speculative short fiction. This is also the month when I’ve decided to switch from calling the stories I list “fantasy and science fiction”, to calling them “speculative fiction”. Quite simply because I include stories that are horror, magical realism, and, well… whatever other kind of beautiful weirdness I can find. “Speculative fiction” works nicely as a catch-all in my opinion, so here goes: here are 13 excellent speculative fiction short stories I read this past month:

So, You’re In an Alternate Universe, by Jeremy Packert Burke in Metaphorosis. “Dylan is from the real universe. It’s not alternate, not like your universe. This is what he’s told you just now, although you’ve known him for years.” I fell in love with this exquisitely told story as I read it. Something about it, or maybe everything about it, struck a deep and resonant chord inside me, because in many ways, this is what I remember that my adolescence felt like. Not that I was in an alternate universe (perhaps), but that feeling of not quite knowing what you are and what you will become, or where you belong… those friends and friendships that feel comfortingly familiar, yet in flux and strange at the same time… all of that. I love the language here, the fluid vibe of the story, and the characters. It’s an amazing story that takes a familiar place and tweaks it so you’re not quite sure what reality is anymore.

Homesick, by Sarah Gailey at Fireside Fiction. “She’s staring back at me with those ancient iridescent bug-eyes of hers. They’re starting to frost over — her eyelashes are limned with white and it’s spreading. She’s grinning at me.” Crab-like, fortune-telling aliens that freeze as they tell your fortune. Humanity at home on an alien planet. Earth abandoned. One desperate woman. This story by Gailey is awesomely weird. It twists the whole “alien invasion” trope inside out AND tips it on its head. Fantastic stuff.

War Dog, by Mike Barretta in Apex Magazine. “He had seen the Dog twice before, and they had acknowledged each other at a careful distance. As veterans, they shared the bond of war, but whereas he had emerged from conflict a respected soldier, she had come out as an illegal gene splice, a piece of dangerous biological equipment.” Barretta’s story starts out feeling like a pretty hardcore, noir-ish military scifi tale, set in a future USA ruled by religion and a fascist-like government, and haunted by a strange disease. By the end, it had me sobbing and crying. A jaded ex-military, a genetically altered human, and a society that has no time or place for those who do not obey… this one’s a gut-wrenching heartbreaker.

The Warrior Boy Who Would Not Suffer, by Abhinav Bhat in Apex Magazine. “An old baba come in from the waste, the boy almost smiled. His would be the old not of frailty, but of strength and wisdom and … cruelty. Wise, yet cruel.” This short story, written in such a way that it feels like a myth rediscovered, is profoundly moving and unsettling at the same time, and I mean unsettling in the best way: it is unpredictable and strange and wonderful. Cruelty, wisdom, pain, knowledge… this is a story that cuts deep.

My Body, Herself, by Carmen Maria Machado in Uncanny Magazine. “When the cave’s ceiling crumples, so do I. Through my body, stone kisses stone. I die.” As story-openings go, I’d rate this one a 10 out of 10. And it gets even better from there. Machado’s story is both haunting and haunted: it deals with death and ghosts and the remains (mind and body and soul) of a girl. Machado’s prose is superb – evocative and beautiful – and this story really got under my skin. According to an interview with Machado, the idea for this story came from a dream she had, and it has a dream-like, hallucinatory quality to it that I really love.

The Night Cyclist, by Stephen Graham Jones at Tor.com. “There must be no compulsion to hide the bodies. Otherwise I’d have never found them.” This is a spectacularly good, and very dark story that I might have to go back and study a few times just to get the full flavour of it. What really gets me about this tale, is how Jones manages to a) get me to care about a rather unlikable character, and b) get me to understand and sympathize with what might at first glance appear to be some rather questionable choices that character makes, as the story develops. It’s marvelously well done, firmly planted in the real and everyday, and then slipping a monster into that everyday reality.

Three Kingdoms, by Matthew Sanborn Smith in Kaleidotrope. “My name is Process Five. I’m a product of the former Shyler Military Labs, a cybernetic organism joining the elemental living kingdoms of vegetable and mineral.” This is a gripping story of transformation and unlikely friendship, playing out in a rural landscape in a war-torn world where people wield amazing technology: technology that can both harm and help. A boy and…well, something that is not quite machine, as we know it, form a bond, and then disaster strikes. I love the original world Smith creates in this story, and it’s a really fresh and original take on the “machines vs. humans” science ficion theme.

All the Mermaid Wives, by Gwendolyn Kiste at 87 Bedford. “In the ocean depths, where the water is blacker than squid ink, we’ve never seen nets, so we don’t know how to hide from them. We don’t know how to hide from men either.” Kiste’s story about mermaids, brought up from the ocean to be experimented on, and eventually also sold off as wives, is part horror story, part dark fantasy. There’s so much pain and dread here, and what struck me was how Kiste explores the terror of being separated not only from your home and your family, but also separated from who you are. It’s a harrowing story, beautifully told.

Hungry, by Shveta Thakrar in Fantastic Stories of the Imagination. “…she longed to sink her sharp fangs into freshly caught flesh, how delicious a still-beating heart would taste“. Bloody and gloriously grisly, this story about a rakshasi who awakens in the present-day after centuries spent… well, let’s say “petrified”, is a lot of fun, and terribly, awfully good.

Some Breakable Things, by Cassandra Khaw in The Dark. “As though to make up for his absence in life, your father’s ghost follows you everywhere.” This evocative ghost story by Cassandra Khaw is dark and heart-wrenching. The main character is haunted by regret and grief and memories in addition to the actual ghost of her father. It’s the kind of story that made me ache inside when I read it, because the feelings it evokes are so excruciatingly real. A powerful read.

Who Binds and Looses the World with Her Hands, by Rachael K. Jones in Nightmare. “I am sorry to hide you, she would say. I do not want to lose you. The apology mollified the darkness inside me, but never quelled it completely.” This story really knocked the wind out of me. Jones creates a stark and bleak world, alive with its own magic: a magic that does not use spoken spells, but sign language. It’s also a story of complex relationships that are not what they might seem at first. There’s so much tension and suspense threaded through this story, and so much emotion coiled beneath the surface: an amazing read.

Shadow Boy, by Lora Gray in Shimmer. “My shadow seethes and I press my forehead against the rear window glass, neon lights flipping my reflection from infant to ancient. From ugly to divine. From girl to boy.” Ripping into questions of gender, identity, and the struggle to be who we really are (even when the world around us wishes we were otherwise), Gray’s story is brutal and beautiful at the same time. The main character’s desperation and loneliness are vivid and palpable, as Gray’s prose both soars and cuts. This is definitely a must-read.

Only Their Shining Beauty Was Left, by Fran Wilde in Shimmer. “What it took for Sam to turn into a laurel tree was a river dream.” People are turning into trees – in their rooms, in their offices. It just happens, and no one is sure why it’s happening, or how it’s happening. This story by Fran Wilde is wonderful, strange, and mesmerizing. It twists and turns through a world where people are haunted by strange dreams and visions, and where people grow roots and bark. As always with Fran Wilde, the world and its people feel real and vivid in the midst of the strange reality they inhabit. A gorgeous, dream-like tale.