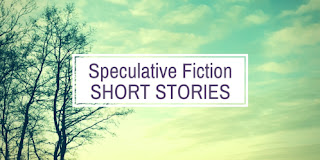 I travelled to and from Sweden in July, and let me tell you, short fiction is one of the best things you can read while on long-haul flights and airports.

You can check out my roundup at B&N, too. There, you’ll find ten other spectacular stories I read in July.

The Book of the Living, by Isa Prospero in The Fantasist
Scribes wielding divine powers, pyramids, powerful glyphs, the dead rising from their graves, tomb robbers, betrayal, dangerous secrets, and a loving couple, drawn into a breath-taking adventure. Yep, this is a real treat of a story. Nemet’s wife Hatshe learned to wield spells from her father at an early age, and since he was executed for treason, she has been looking for a way to clear his name and punish those who falsely accused him. But when the opportunity to find out what really happened to her father presents itself, things do not go the way she thought. This novella is brim-full with rich storytelling and satisfying world-building. It has a plot that draws you in right from the start, and vividly drawn characters that pop off the page.

Yard Dog, by Tade Thompson in Fiyah #7
A tall, strange man starts visiting a jazz club. The first few times he’s there, he only watches and listens, but one night, he plays the horn, and strange things happen to those who listen. I won’t give the plot of this wonderful story away, but I will say it’s a magical  read. There’s a vivid sense of place, the plot is unwound with skill and care, and Thompson’s descriptions of music, and what it does to the people listening, is exquisite: “I can’t tell you what he played because I don’t remember, but I do know that the note was clear and high and piercing. Not a soul spoke. Not a soul could speak because whatever Yard played made everybody blow their wigs, man, bible.” Gorgeous story, perfectly told.

The Athuran Interpreter’s Flight, by Eleanna Castroianni in Strange Horizons
This sharp scifi story by Castroianni is a powerful and heart-rending tale about Sam-Sa-Ee, an Athuran, who is being used as an interpreter by a Henon businessman. Everything about who Sam-Sa-Ee has been altered to serve her master. Her mind has been fused with circuitry, her brain has been altered, and even her body has been taken from her: “…Sam-Sa-Ee is rid of her Athuran body, too grotesque to Earthian eyes—a vile thing composed of millions of tiny tendrils, or cilia, or tentacles; no one knows what they are and no one cares.” To me, this incisive story speaks about the devastation powerful, ruthless people and oppressive political systems can cause – how they can destroy worlds, nature, and other people’s bodies and souls. But it’s also a story about resistance and salvation. Brilliantly done.

The Magician Deletes Her Feed, by Kate Lechler in Kaleidotrope
A quiet and moving story about magic, spells, and creativity; about taking the time to dedicate yourself to something, to work through something difficult rather than reaching for quick fixes and instant gratification, about trying to achieve something even if you’re not sure you can pull it off. I love this story, I love its heart and soul, I love its quiet, careful, powerful voice, and I love its attention to the details of how we work and live our lives, and how doing something profound and important is not always either easy or immediately rewarding.

The Last Banquet of Temporal Confections, by Tina Connolly at TOR.com
Connolly’s story is marvel of fabulous fantasy, intricate magic, and delicious baked goods. Saffron’s husband Danny is a baker. He has mastered the art of creating baked goods that trigger specific kinds of memories when eaten. Because of his ability, both Saffron and Danny have been forced into service at the court of the Traitor King: Danny is the Head Pastry Chef, and Saffron is the King’s own Confection Taster. At a lavish banquet, Saffron samples the baked goods her husband has made to delight and impress the King’s guests. She hates the King for what he’s done to her and Danny and the realm, but she knows the chances of defeating the ruler are slim at best. As the baked goods are presented, sampled, and devoured at the banquet, Connolly masterfully ratchets up the tension while also telling us the tale of Danny and Saffron, and the King who holds them, and the kingdom, captive.

Untimely Frost, Unlikely Bloom, by Hayley Stone in Flash Fiction Online
A fairy-tale retold with a keen, jagged edge. Here we meet a princess with blood-red lips and raven-black hair who lives in the forest. Three drops of blood have been shed, there’s a curse, and there’s a hunter, trying to find her. While the strands of the story are familiar, Stone brings them together in a new pattern, turning and twisting the tale into something much devastatingly dark and harrowing.

#WhiteWitch, by Shauna O’Meara in Dimension6
I absolutely love this thrilling and action-packed story by O’Meara. It takes place in a future where a group of soldiers (using crowdfunding!) do their best to protect North America’s water supply by defending the glacier ice in Alaska. They are in constant danger from invading forces, bots, bombs, drones. The cast of characters is brilliantly brought to life, and O’Meara’s prose is vivid and engaging, giving this story a rollicking, cinematic feel. Social media, crowdfunding, climate change… everything comes into play as the soldiers, including the fierce White Witch, and the Calwell, the camera man who has joined them to help further their cause, try to fight off the enemy and keep each other alive on the ice.

It Feels Like Déjà Vu, by Phong Quan in Metaphorosis
Confession: I love stories that skip around in timelines and alternate universes and various timelines. This story slips and weaves between timelines as Jon, a physicist, tries to find his way back to the time and place where he started out, before an experiment knocked him for a loop. His memories are not always reliable, and as time passes, he has become ever more afraid to lose his grip on the real reality, his original timeline. Upping the ante is that a terrible flood, bringing death and devastation, lurks in the future/past/present. Quan weaves together the timelines with the relationships and characters that matter to Jon, and these bonds of friendship and love serve to deepen and enrich the story. A gripping must-read.