Book review - ALL THE MURMURING BONES by A.G. Slatter

All The Murmuring Bones is a brand new novel from A.G. Slatter, AKA Angela Slatter. The book is an intricately woven, hauntingly beautiful, gothic tale by one of the best storytellers in the business, and you'll encounter mer-folk, witches, sea witches, a singing automaton, a kelpie, a strange, black lake, devious men, dangerous women, and a lot more besides.

It's a tale infused with dark fantasy and horror, and it has the darkness and depth of old-school fairytales, the kind of tales where magic is a natural part of the world, where terrible things might happen to good and bad people alike, and where bargains with magical creatures often come at a very high price. All the Murmuring Bones is also a compelling mystery novel where we follow Miren O'Malley's quest to unravel the mystery of her parents' disappearance years ago, and to uncover the truth of how the now benighted O'Malley's once gained their outrageous fortune. 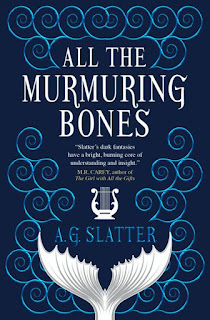 Miren O’Malley was orphaned as a young child and brought up by her grandparents on their isolated, rambling estate, Hob’s Hallow. Long ago her family prospered due to a deal struck with the mer: safety for their merchant ships in return for a child of each generation. But for many years the family have been unable to keep their side of the bargain and their fortunes have suffered as a result. When Miren’s grandfather dies, her grandmother plans to restore their glory – but at the price of Miren’s freedom.

A spellbinding tale of dark family secrets, magic and witches, and creatures of myth and the sea; of strong women and the men who seek to control them.

All the Murmuring Bones is set in a world familiar to fans of Slatter’s work. We’re in her Bitterwood Bible and Sourdough universe, where magic and shapeshifters and all sorts of unpredictable and dangerous fae creatures lurk everywhere. In this book however, we’re seeing that world from a somewhat different point of view since the story takes place long after most the stories from the Sourdough and The Bitterwood Bible short story collections have become legend and history, though the murmurs of those tales still suffuse the world.

Miren O'Malley’s parents disappeared when she was a child, and she’s grown up at the family estate Hob's Hallow, where she has been sheltered and shaped by her grandmother every step of the way. In the wake of her grandfather's death, Miren is being groomed by her grandmother for a marriage that is meant to save and secure the dwindling family fortune (in more ways than one), but Miren wants no part of it, and things do not go according to grandmother's plan.

In the disastrous aftermath of her betrothal, Miren leaves Hob's Hallow fiercely determined to find a way to keep her freedom. Armed with an old letter from her long-lost mother, and with her intended husband likely to hunt her down, Miren sets out on a dangerous journey to find her parents, and to lay bare the true nature of the deal the O'Malleys once struck with the sea-dwelling mer. On that journey, Miren encounters all manner of characters and creatures--some of them helpful and all of them perilous in one way or another--because this is a world where magic permeates everything and percolates everywhere, even when it's not always on display or practiced openly. Much like the heroines of the old fairytales, Miren must walk down many dark paths before she is fully able to grasp and use her own burgeoning powers, magical and otherwise.

Unravelling the mysteries of her parents' disappearance and the origins of the O'Malley fortune will fundamentally shift Miren's understanding of herself, her family, and her family's legacy. And once she knows the truth, she must decide what to do with the terrible knowledge she has gained, and how she will use it to reshape her own life and future.

Reading All the Murmuring Bones, I was reminded once again of how much I love the women in Slatter's stories. Miren O'Malley is strong-willed and fierce with an ornery, defiant streak that really appeals to me. Beyond Miren, there are a lot of other women in this story, and they are all compelling because they are as complex and complicated as women in the real world. Sometimes they are good, sometimes not. Sometimes bad things are done to them, and sometimes they do bad things to others. But no matter what, these women always find ways to grasp and wield power, in ways that might be petty and mundane, or grand and terrifying. Even the most downtrodden of these women, the ones who seem poor and weak and frivolous to others, find ways (big or small) to try to influence some small sliver of the world. They work with the shades of grey of the real world, struggling and fighting to make a space for themselves in a society that often conspires to restrict or take away their freedom. And no matter what, they are never reduced to evil caricatures or one-dimensional, pretty paper dolls.

All the Murmuring Bones is a rich and lush page-turner, twining together strands of gothic mystery, fantasy, horror, and fairytale. If you're already a fan of Slatter's work, this is obviously a must-read. And if you've never encountered her work before, then this book is a perfect entryway into her magical, mesmerizing universe.

(This review first appeared at mariahaskins.com)