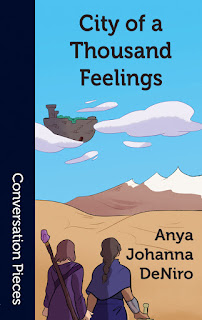 City of a Thousand Feelings is a fantasy novella by Anya Johanna DeNiro, published by Aqueduct Press, and it’s a story that I am still turning over in my mind days after reading it.

I first fell in love with DeNiro’s writing when I read her divine (literally) story “Faint Voices, Increasingly Desperate” in Shimmer some years ago. City of a Thousand Feelings is further evidence of DeNiro’s deft skill at writing stories that are both strange, beautiful and profound, full of surreal imagery and gleaming with lyrical prose.

In this novella, DeNiro blends bold brushstrokes of epic fantasy and social allegory with an intimately detailed and wrenching portrayal of a long and complex relationship between two people who have both been bruised and battered by a hostile world.

The official blurb from Aqueduct Press:

The City of a Thousand Feelings doesn’t let certain people inside its walls. It’s a place where emotions can become visible, but it flees the approach of a makeshift army who want to enter. Two of the trans women in this army forge a deep, complicated, and at times contentious friendship spanning thirty years. They must come to terms with not only the City’s literal and figurative gatekeeping, but also other, even more sinister forces that use necromancy against them. As the narrator and her friend’s lives are sundered apart, they must come to terms with what it means to not have a home, and what it means to be queer and aching for such a home. A sword and sorcery tale with emotional resonance, City of a Thousand Feelings brims with both the visceral and the allegorical, allowing the two trans women at the center of the story to claim their own space.

There are two trans women at the heart of this story. One is the unnamed narrator. The other is the woman she is telling the story to–her sister in arms–and her name changes through the years, from Melody to Mystery to Mercy.

We first encounter the women as they are about to launch an assault on the City as part of an army, made up of people who are desperate to get into the City and to punish and defeat those who have rejected them for so long. Righteous though their cause may be, the assault does not end well, and in the aftermath of the battle the two women are separated for many years. Through the rest of the novella, DeNiro shows us how the two women deal with the aftermath of that battle, how they survive, how they are reunited, and how they eventually make a final audacious attempt to return to the City and fight for a new purpose.

City of a Thousand Feelings has a strong allegorical bent. Most obviously, there’s the City of Feelings itself, a place with gatekeepers and walls, that does not allow the trans women to enter, and which turns out to be quite different on the inside than what those on the outside believed it to be. The novella also has riveting fight scenes full of magic and mayhem that recall the allure of classic sword and sorcery tales. There are eye-popping monsters, dead angels, dazzling spells, fiendish corpse-mongers, and the scenes set inside the City itself are stunning in their imaginative power.

What makes the story even more compelling, is that DeNiro gives you all this, allegory and action, without ever losing sight of the heart of the story: the fundamental bond and evolving relationship between two characters who choose different ways to survive, and yet find a greater power, and maybe even a new kind of salvation, when they come together.

One of the many things I love about City of a Thousand Feelings, is how the story goes for difficult and complex emotional truths rather than facile answers as it deals with the fallout of trauma, grief, and defeat. Nothing comes easy here, and every small victory is dearly paid for, but even so, DeNiro shows us the power and possibility of hope and love, solidarity and friendship.

The hardest thing in the world–this world–is to allow yourself to be loved. Love is the groundswell and the bedrock, the tide and the shore.

City of a Thousand Feelings is available now from Aqueduct Press.

Read a sample of the book.