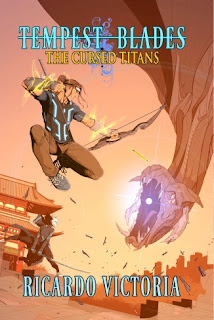 The triennial Chivalry Games have returned! After helping to destroy the Withered King, Alex and the rest of the group find out that saving the world has consequences. While he is secretly battling with depression and with the Alliance on the verge of collapse, a diplomatic summit and the Chivalry Games—to be held in the far off Kuni Empire—may give everyone the opportunity to turn things around. Alex builds a team to represent the Foundation in the Games, facing off against the best fighters in the world. When an ancient being tries to raise legendary nightmares known as Titans using the peace talks as a trap, Alex has to find a way to save everyone before it is too late. Alex must learn that he is not truly alone to save the world from the chaos of the Titans. In a world where magic and science intermingle, anything is possible.

Just like The Withered King, the first book in Ricardo Victoria's Tempest Blades series, The Cursed Titans is an entertaining and action-packed blend of science fiction and fantasy, with a great sense of humour, an anime vibe, and filled with a group of great characters. Reading The Cursed Titans, I was struck by how well Victoria handles the large cast of characters: everyone has a backstory and distinct personality of their own, and everyone gets their own moments to shine. It's fun to read a story that features such a terrific group of friends, enemies, and frenemies.

There are a lot of fast-paced action sequences in the book, with the characters finding themselves in tight spots and having to finagle and fight their way out - usually by working together. I especially love how the magical weapons in the story, the various Tempest Blades, have a real mind of their own, and often display strong opinions about who should and should not wield them.

In the midst of monsters and mayhem, and a huge event called the Chivalry Games, Victoria explores some darker and more personal themes in this book, including anxiety and depression, and how difficult it can be for people to ask for help, and for others to realize they need help, when it might seem to people on the outside like they ought to be fine and able to handle everything being thrown their way. It's a nice touch to allow these characters, who often have outstanding fighting skills and wield astonishing magical weapons, to deal with real human problems, including mental health issues.

The importance of friendship is a crucial part of The Cursed Titans, with loyalties being challenged and strengthened through the story. I particularly like the bond between Joshua and Kasumi in this book. Joshua is dealing with some terrifying issues, like the fact that he isn't always entirely Joshua at all but rather a terrifying beast-like creature, and the people around him often treat him like a danger, a liability, and even a monster (and not totally without reason). In spite of that, Kasumi's friendship and loyalty is unwavering, and I really enjoyed reading about these two.

Victoria has created a unique and rich world in his books where science fiction and fantasy mingle beautifully, and there is plenty of action and adventure woven into every part of the story. A solid, entertaining read with a grand cast of characters and a real human touch.