Over a decade has passed since the ant queen began her apocalyptic war with the humans. In the aftermath, she leaves behind a strange legacy: a race of uplifted animals, the queen’s conscripts in the war effort, now trying to make their way in the world they destroyed. While the conflict has left deep scars, it has also allowed both sides to demonstrate feats of courage and compassion that were never possible before. And now, after years of bloodshed, the survivors have a fleeting chance to build a lasting peace.

But peace always comes with a price. The holy city of Hosanna—where animals and humans form a joint government—finds itself surrounded by wolves who are determined to retake the land. A powerful matriarch has united the rival wolf packs, using a terrible power harnessed from the Queen herself.

Soon, the looming violence pulls in those who sought to escape. The war hero Mort(e) suspects a plot to destroy Hosanna from within, and recruits a team of unlikely allies to investigate. Falkirk, captain of the airship Vesuvius, must choose between treason and loyalty to save the city. And D’Arc, sailing aboard the al-Rihla, learns that the wolves may have triggered a new cycle of life for the Colony, bringing a final reckoning to animal and human alike. Once reunited, the three outcasts begin a journey into wolf territory to face the last remnant of the queen’s empire. But while destiny has drawn them together, it may destroy them as well, for even love, courage, and honor may not be enough to stop the forces of destruction set to be unleashed on the world. 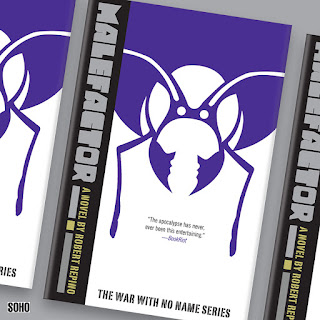 Malefactor is the spectacular finale to Repino's War With No Name series, and it is a harrowing, ferocious, and bitingly sharp tale that packs a real emotional punch, especially in its final chapters.

If you're not familiar with the books, here's a quick intro to the world we find ourselves in: more than ten years ago, almost overnight, all the animals in the world that were once tame or wild or farmed, evolved into bipedal, fully sentient creatures capable of speech and conscious thought. Behind that transformation lurked a hidden enemy: an ant colony led by a formidable ant queen, hellbent on destroying all humans. After this Change, a terrible war began between humans and the animals they once dominated, and while the ant colony was destroyed (so it was thought, at least), the world was left broken.

Like all the books in this series, Malefactor is a wild, absolutely bonkers ride from start to finish. The rising threat of the united wolf packs, and the possibility that the ant colony has returned to wreak havoc on the Earth, means that every course of action is desperate and fraught with danger. Along the way there's a puppy in peril, giant fighter ants, a train fight/heist sequence that had me on tenterhooks, herbivores turning carnivorous, humans turning themselves into wolves, and, best of all: a combative, hilariously gnarly, odd-couple relationship between a bat and a beaver that made me laugh and broke my heart.

The power struggles between (and within) the various wolf packs, and the machinations of the wolves' new human allies, provide some of the darkest scenes of the series (and that's saying something). It drives home the point that while the animals succeeded in throwing down the old world, it has not been possible to build a new world that is fit for anyone, human or animal, to live in. At least not yet.

We see this world through a few different points of view in this book, but the crucial ones, for me, are the the two main protagonists of the series: D'Arc (formerly the pet dog Sheba) and Mort(e) (formerly the house cat Sebastian). And while Mort(e) plays a big part in Malefactor, it is D'Arc that is at the center of the story. Her quest is intensely personal in this book as she finds herself lost at sea, then suffers a devastating loss, and finally has to fight to save her family and the fragile shared animal/human community of Hosanna.

Throughout the books, the relationship between Mort(e) and D'Arc has been the heart of the story. From the beginning, they have been linked by the bond they shared even before the Change, back when they lived together as pets. While their bond isn't broken in Malefactor, they clearly have opposing views on how to live in this seemingly grimdark world. Mort(e), worn down and made ever more cynical by the years of strife and warfare, would rather withdraw and live out his days in whatever peace he can find away from the struggle. For D'Arc, leaving the fight to others is not an option. She still believes it's possible to overcome the old hatred and build something new: a society where humans and animals can live and work together.

As dark as this book may seem (and there are some truly bone-chilling moments here, one of which involves the deer turning on the wolves in a scene that will haunt my nightmares), there are gleams of light through it all. That light is there in D'Arc's dogged (ha!) determination to keep fighting for something better, even when it seems futile. And it's there in the loyalty and friendship that bind many of the characters together, even as the world seems to crumble around them.

This light is especially evident in the storyline that follows a bat and a beaver--enemies right down to the bone--on a madcap, seemingly impossible quest for freedom. Following these two characters, both deeply scarred and tainted by previous events, as they are thrown together by fate and necessity, provides some of my favourite scenes in Malefactor. They have both done terrible things for causes they thought were just. They have every reason to mistrust and hate each other, but they end up having to work together in order to save themselves and, maybe, the world. This storyline provides some darkly funny moments and some pivotal, emotional scenes as well.

In Malefactor, as in the earlier books in the series, Repino consistently returns to this theme: the importance of friendship, loyalty, and love between individuals as maybe the only source of hope of salvation in a world where brute force and extremist fervour seem almost impossible to defeat.

At its most basic, this is a tale of friendship and love. Mort(e) the (former) cat doesn’t believe in grand plans and prophecies. He fights and makes sacrifices in the struggle against the humans, but he is not loyal to, or motivated by religion or politics or ideology. He does believe in friendship and loyalty and love, because he has experienced those things: not with humans, but with Sheba the dog, before the world changed. Through every hardship and every battle, the memory of that sustains him.

While D'Arc/Sheba has in many ways left Mort(e) behind in Malefactor, and while they are separated for most of the book, I kept hankering for the moment when they would be brought together again. When they are finally truly reunited, Repino finds a way to pay off the emotional investment I've had in these characters and their relationship in a totally unexpected way that also felt absolutely, genuinely right. (And yes, it made me cry.)

Malefactor is an intense book, full of  brutal battles, daring escapes and rescues, heart-wrenching choices, terrible betrayals, and fragile hope. As far as I'm concerned, it's a must-read.