Book review: The Hand of the Sun King (Pact and Pattern #1), by J.T. Greathouse

The Hand of the Sun King (Pact and Pattern #1), by J.T. Greathouse

All my life, I have been torn between two legacies: that of my father, whose roots trace back to the right hand of the Emperor. That of my mother's family, who reject the oppressive Empire and embrace the resistance.

I can choose between them - between protecting my family, or protecting my people - or I can search out a better path . . . a magical path, filled with secrets, unbound by empire or resistance, which could shake my world to its very foundation.

But my search for freedom will entangle me in a war between the gods themselves . . . 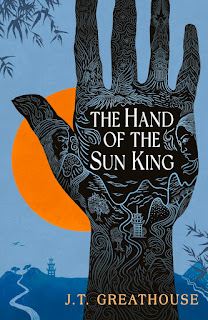 The Hand of the Sun King is a complex and beautifully written fantasy novel, the first in a series, about Wen Alder, a young man blessed with a great talent for magic and also a great talent for getting himself (and others) into trouble. We follow him from childhood as he tries to find his way in the world, navigating between the two main influences on his life: the Empire and its magic, represented by his father's side of the family; and the rebels who use an older form of magic and who oppose the Empire, represented by his mother's side of the family and in particular by his grandmother. (His grandmother is the one who gives him his other name, Foolish Cur, which describes him to a T for much of his life.)

These conflicted loyalties pull Alder in two opposing direction, and the defining struggle of Alder's life is his quest to not just find a middle way between the empire and the rebellion, but to find a different kind of magic between the two. As a child, he first learns his people's traditional magic from his grandmother. Later he ends up serving the Empire, honing his skills in the school of magic his father once attended. Though he is no blithe follower of the empire, his ambition still leads him to do the empire's work, even as he also continues to search for what he hopes will be a different magical path. In the end, Alder's choices have calamitous and violent repercussions for those around him and himself.

Greathouse creates a grand and intriguing world in this book. The depth and detail of the magic system, the various ways that people in the empire use and access magic, are fascinating. Many different peoples and many different kinds of magic exist under the rule of the emperor and I like how Greathouse describes a system of magic that reflects the political reality of colonization. The empire colonizes, uses, and abuses both people and resources to maintain and grow its own power and influence and they do the same with magic. Politics and magic are intertwined in ways that make Alder's quest a dangerous and radically political act on several levels.

On a personal level, beyond the politics, Alder is a person who is obsessed with magic and how to use it. He revels in it, loves it, obsesses over it and he is truly a powerful wielder of magic, though through much of the book, he has to learn the hard way how to use magic without destroying himself in the process.

As good as Alder is at using magic, this is definitely not a simple story about One Good and Perfect Hero. One of the things I really appreciate about this book is that Alder is deeply flawed. His ambition and his pride often make him do rash, ill-advised, and even terrible things, hurting himself and others in the process. He has a hard time understanding just how frightening his power, and his personality, might seem to others.

Greathouse is an excellent writer, and I love how he gives us time to get to know Alder and his world, revealing the layers of the world, the characters, and the ways of magic, before ratcheting up the tension in the second half of the story as Alder and his existence are torn apart in harrowing fashion.

The story ends with a mind-blowing bang that upends everything we've come to understand about the world so far. At the end we're also introduced to a new set of powerful characters, and I can't wait to see where Greathouse takes this story in the next book.

Buy The Hand of the Sun King.

Become a Patreon supporter / Support me on KoFi