(I also posted this special flashback short story roundup on my Patreon.) 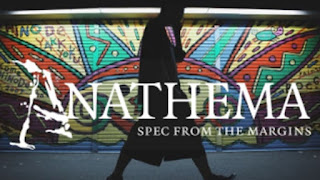 Anathema: Spec From the Margins is one of my favourite SFF zines and right now they are running an IndieGoGo campaign, raising funds so they can keep publishing more great work by Queer/Two-Spirit POC/Indigenous creators.

My short fiction recommendations for this week is 16 stories from Anathema over the years. Read some great speculative fiction, and help support more work: 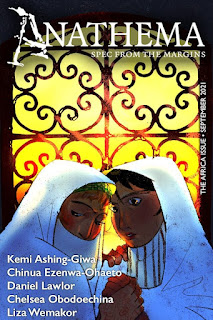 You should also read the magazines latest issue: The Africa Issue. Cover Art: "Confessions", by Mikoto.

Before Whom Evil Trembles by Nhamo

Nhamo's story is a masterpiece of lyrical, evocative prose and a story that is sharp as a razor. A ballerina with a harrowing backstory works herself to the bone in order to succeed in her chosen artistic profession. The memories of her past never leave her, and the world around her won't let her forget that they do not believe she fits in or belongs, or that she can become what she longs to be. And yet... below the surface, the ballerina has a strength that is only revealed at the utmost end. I love how this story weaves together memory, the power of ancient deities, and present day hostility.

Fossilized by Jessica Yang in Anathema

Yang tells us the story about what happens when Huayin's amah dies, and Huaying, eventually, hikes up the Tianran mountain where a god is said to dwell. "Fossilized" is a poignant, quietly powerful story about grief and family and language, and about the sometimes complicated bond between older and younger generations. It also ought to come with a warning: "this story will make you HUNGRY!" because the way food is described here (especially pork buns), is absolutely delectable.

Never Yawn Under a Banyan Tree, by Nibedita Sen

Fair warning: there is so much delicious food in this story that it will probably make your mouth water. It is also wickedly funny as it deals with family, unladylike behaviour, sexuality, and a very hungry, and seriously food-loving ghost.

What a fierce and fiery and deeply unsettling story this is, set in a society where the women once, not too long ago, made a hard choice, and carried it through to its sweet and bitter end. They changed the world, and were changed in turn. Beautiful, powerful, and heartbreaking.

A Complex Filament of Light, by S. Qiouyi Lu

Set in a frozen and forbidding Antarctica, this moving and aching story deftly explores anxiety, insecurity and depression, and how our sense of self, and our understanding of others, can be warped and distorted. There’s a strange encounter with an enigmatic presence in the icy wastes, and there are also powerful threads of light, hope and friendship woven into the story.

We Have Evacuated, Have a Good Day by Jendayi Brooks-Flemister

A story about a terrible storm, and a grandfather who lives alone and refuses to evacuate. I love how this story twists and turns through old memories, and through the grandfather's old house, as the storm worsens. There's a sense of something askew as we realize that the old man might have other things on his mind than just the wind and rising waters.

The Poet and the Spider, by Cynthia So

She peers down at you, her eyes fathomless and dark, and you feel a queer twang inside, as though someone is playing the guzheng between your ribs. You don’t think there’s any hope for you at all.

What a gorgeously written and exquisitely crafted story this is. Fairy-tale, fantasy, myth, romance and reality blend and twist together throughout this fantastic story by So. I was not sure where this tale was taking me, but I loved every step of the way there.

Death slumps on the table, head balanced on their elbows, and lets out an exasperated huff. I’m not here to collect.

Sharma’s story captures a mood and vibe that is both tender and sharp. We meet the fortune teller Elisha dealing the cards in Brooklyn, when Death comes to visit. “Does it turn out okay in the end?” is the question everyone wants Elisha to answer and the way that question is dealt with makes for a subtle, multi-layered and deeply moving story.

Tiger of the New Moon by Allison Thai

Hoa, a young woman trapped in a harsh life under her father's thumb, enters the woods and meets "Ông Ba Mươi, Mister Thirty, the tiger with a taste for man’s flesh on every new moon". What follows once she meets that tiger is a monster tale that is also a love story. The horrors here are not so much of the beast's making, as of the humans in the tale. It's sort of a take on Beauty and the Beast, but also something much different as Thai blends fairytale and myth with the stark reality of being trapped in a situation you can't get out of... unless, perhaps, you have a tiger on your side.

The Future in Saltwater by Tamara Jerée

The god turned a soothing shade of black upon touching me for the first time and wrapped its eight suckered arms securely around my forearm. ----- The bulbous mantle of its body flattened as it sunk the needle of its beak into the soft flesh of my inner elbow. I winced.

In a world where the climate and the environment has been ravaged, a child receives a difficult quest from the strange, tentacled deity in the local temple. That might seem like a run-of-the-mill opening for a story, but here, things soon take a different and more harrowing turn than I expected as the child resists and even refuses the call. After all, it's not easy to just pick up and leave when you have responsibilities at home, including a sickly parent to care for. I love the rich and deep world-building that flows through this story, and I love how Jerée twists and turns the concept of quests and sacrifice here, ending up with a story that puts a new spin on the idea of a "chosen one".

There Are Ghosts Here, by Dominique Dickey

When Lucas’s and Louisa’s older brother Leo dies, it devastates their whole family. Another disaster soon follows, as their parents are killed in a car-crash. After that, the orphaned siblings grow up with their distant cousin Maisie and her family, but they never really come to terms with Leo’s disappearance. There is strange and unsettling magic at work right from the beginning of this story, and the way Dickey weaves together childhood, grief, death is masterfully done. And as we delve ever deeper into Maisie’s interest in, and power over, dead and buried things,  the story twists and turns in ways that makes it both deeply disturbing and profoundly haunting.

The Pull of the Herd, by Suzan Palumbo

There’s a doeskin hidden in a cedar chest, and outside, in the woods beyond the town, deer-women slip their skins off together. Agni was once one of them, is still one of them, maybe. Except, she has never been able to slip the doeskin on as easily as the others. What a sharp and beautiful and aching story this is. When the herd is threatened, Agni faces some hard choices. Palumbo writes perceptively about how hard it can be to fit in, about being stuck between two worlds, torn by love and belonging on either side. About always feeling incomplete and full of longing, no matter where you go.

A House With a Home by Jon Mayo

Do you need a feel-good ghost story? One that’s somewhat unsettling at first, but then turns out to be life-affirming and even heartwarming? Well, look no further because Jon Mayo has written just the thing you need. This is a ghost story with a difference—with a ghost that does not want to murder or possess, but simply needs kindness and understanding (and maybe a video game or two).

When she’s 12, Moses is bullied by a boy at school, and one day, he harasses her when she’s heading home with her younger sister Jordan. Moses lashes out, and suddenly, inexplicably, the boy is gone. No one ever sees him again, and Moses and Jordan are not quite sure what happened. Later, Moses serves in the military, fighting a war in a foreign country. There, she is confronted with the devastating reality of what she is capable of, and when she returns home, nothing is the same. This is a riveting, gritty story that follows Moses as she struggles to come to grips with her abilities and the memories that haunt her as she drifts through a life with Jordan as her only safe haven.

This is the Nightmare by Aysha U. Farah

What if you had a bot in your home that was supposed to take care of you, but you gave it your own flawed, problematic personality? And what if that bot wasn’t just able to walk around your house, and your city, but was also able to access your mind? That is just part of the premise of this tense and chilling story, part near-future science fiction and part psychological horror. Farah expertly builds the tension until you feel an abyss lurking beneath the protagonist at every step. In the end, reality and memory, and the cyberworld and the dreamworld, become almost impossible to tease apart.

It starts out with something as mundane as a daughter giving her aging father a hearing aid. Then, it slowly descends into nail-biting terror, with a turn into edge-of-your-seat horror-thriller. What makes Hudson’s story stand out is how well it works on every level. The horror is firmly anchored in the real world, with perfectly captured details of family life: the joys and difficulties of intergenerational living the small indignities of aging; and the trials and tribulations of immigrants navigating a new country where people don’t always take the time to listen. Beneath that everyday surface, Hudson ratchets up the tension to almost unbearable levels. A definite must-read.

Anathema's IndieGoGo campaign has lots of great deals on subscriptions, some excellent swag, and even novel critiques!