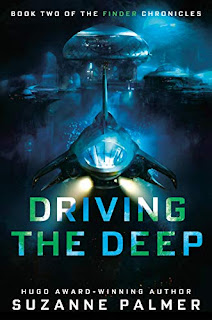 Driving the Deep by Suzanne Palmer

As a professional finder, Fergus Ferguson is hired to locate missing objects and steal them back. But it is rarely so simple, especially after his latest job in Cernee. He’s been recovering from that experience in the company of friends, the Shipmakers of Pluto, experts at crafting top-of-the-line AI spaceships.

The Shipmakers have convinced Fergus to finally deal with unfinished business he's been avoiding for half his life: Earth. Fergus hasn’t been back to his homeworld since he was fifteen, when he stole his cousin’s motorcycle and ran away. It was his first theft, and nothing he's stolen since has been anywhere near so easy, or weighed so heavily on his conscience. Many years and many jobs later, Fergus reluctantly agrees that now is the time to return the motorcycle and face his family.

Unfortunately, someone has gotten to the motorcycle before him. And before he can figure out where it went and why the storage unit that held it is now filled with priceless, stolen art, the Shipyard is attacked. His friends are missing, presumably kidnapped.

Accompanied by an untrustworthy detective who suspects Fergus is the art thief and the sole friend who escaped the attack, Fergus must follow the tenuous clues to locate and save his friends. The trail leads them to Enceladus, where Fergus plans to go undercover to the research stations that lie beneath the moon’s thick ice sheet deep in a dark, oppressive ocean.

But all movement and personnel are watched, and the limited ways through the thick ice of the moon’s surface are dangerous and highly monitored. Even if Fergus can manage to find proof that his friends are there and alive, getting out again is going to be a lot more complicated than he bargained for.

In 2019 I read, loved, and reviewed Finder, the first book in Hugo-Winner Suzanne Palmer's Finder Chronicles for B&N's Sci-Fi and Fantasy Blog. I called it "a fast-paced, hugely enjoyable sci-fi adventure", and the same holds true for this sequel. Driving the Deep is a thoroughly entertaining, hellaciously fun and gripping adventure, with an awesome cast of characters, and powered by an excellent blend of real science and alien-infused science-fiction.
As in Finder, we're in the company of space-faring Scotsman Fergus Ferguson, who was somewhat modified by mysterious aliens in the previous book and now wields certain electrical powers that can both be useful and terrifying. (Those powers come in handy several times in this book, and I am really, really wondering what they'll be used for in the next book.)
There are a lot of reasons why I love Driving the Deep and Finder. For one, there's the working class vibe of the people and the settings, reminiscent of movies like Alien and shows like The Expanse, fictional futures where we're not dealing with super soldiers, or ultra-rich geniuses, but various kinds of everyday, working people (and aliens), eking out a living in a world of powerful corporations and and planetary governments.
I also love Palmer's focus on communities, on groups of people working and living together. In Finder, we got to know the community and people of Cernee, a gigantic space station, and in Driving the Deep, we are immersed in the community based beneath the ice and water on Saturn's moon Enceladus. Fergus is there to find his friends the Shipbuilders who have been kidnapped by unknown assailants. But, to cover up his real objective, he has finagled a job for himself driving a transport between various stations below the icy waters. (There are some truly breathtaking moments involving the piloting of these transports, by the way, and the title, Driving the Deep is well earned.) Along the way, Palmer gives us delicious details, like, what people eat in this community, how they live and sleep and get around; why they've come there; what they do for fun, and so on. It's this level of everyday worldbuilding that really makes me love Palmer's fictional world.
Another thing I love about this book, and this series, is how Palmer deals with the presence of Artificial Intelligences and aliens. When it comes to AIs, there's the very helpful talking, thinking ship (built by Fergus's friends the Shipbuilders) we first met in Finder, and on Enceladus, Fergus encounters another AI. Palmer doesn't make these technological marvels the Big Bad. They are not bent on destroying humanity (at least not so far?). Instead, they're characters, just like the people, and Palmer gives them their own unique voices and personalities. I am definitely a sucker for good and decent (and often funny!) AI-entities like these.
It's a similar story with the aliens. There are lots of aliens in Palmer's universe: no longer do humans have to wonder if they're alone in the universe! But, like the AIs, they are not a monolithic force of homicidal, horrifying enemies. (The Asiig, the aliens who "altered" Fergus in Finder are mysterious and frightening for sure, but they're not your typical world-destroying menace.) There are many kinds of aliens in Palmer's universe, and they're important since it's very much thanks to alien technology that humans have acquired the ability to travel and live in space the way they do. Aliens work with humans in the solar system and elsewhere, and just like with the AIs, Palmer gives them all personalities, making them individual characters. They're part of crews and communities everywhere Fergus goes, and I just love how the books envision this future society that is in no way perfect or idyllic or a utopia, but where good communities and friendship, are a natural part of the world, and can include both aliens and AIs.
I love all these things and more about Driving the Deep, but the main attraction for me, is Fergus Ferguson himself. He's a hilarious trouble-magnet, for one. When he heads back to Earth at the beginning of the book to take care of some old, unfinished business, he barely has time to set foot on the planet before he's in deep, DEEP trouble. Over and over again, Fergus finds himself in a whole lot of awful trouble and has to think, fight, lie (or obfuscate), or sometimes just alien-zap his way out of it. Fergus is hugely likeable. He's quick-thinking, able to MacGyver himself out of a lot of bad situations, resourceful, and brazen when he has to be. But what I mostly love about him is the way Palmer writes him as a person who makes friends wherever he goes because he's just such a decent guy. Of course, he also makes enemies everywhere, and his showdown with a certain nemesis in Driving the Deep is pretty darn harrowing and spectacular.
There's a basic goodness to Ferguson, and to the world itself, in Palmer's books. Not to say that everyone is nice and good, far from it, but there's a really appealing basic belief that people can be worthy of trust and friendship, rather than some cynical grimdark world where everyone wants to shaft and shank everyone at the first opportunity.
If you're looking for some rollicking great scifi that kept me hooked right until the epic conclusion, then these books are for you. And if you get to reading right now, you'll be ready to pick up the third book, The Scavenger Door, later this year.
🕮