Book review: THE ONLY GOOD INDIANS by Stephen Graham Jones 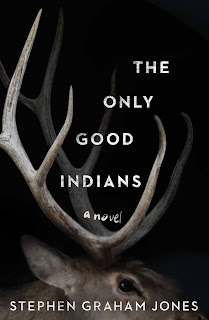 The Only Good Indians by Stephen Graham Jones

From New York Times bestselling author Stephen Graham Jones comes a novel that is equal parts psychological horror and cutting social commentary on identity politics and the American Indian experience. Fans of Jordan Peele and Tommy Orange will love this story as it follows the lives of four American Indian men and their families, all haunted by a disturbing, deadly event that took place in their youth. Years later, they find themselves tracked by an entity bent on revenge, totally helpless as the culture and traditions they left behind catch up to them in a violent, vengeful way.

The Only Good Indians is a striking, devastating, grab-you-by-the-neck tale filled with gruesome deaths, a stalking horror brought to life by past misdeeds, and spectacular gore mixed in with sharp and jagged psychological horror. The last third of the book, when the vengeful creature is hunting down.... well, I won't say who, but you'll know who if you read it... is some of the most tense and gripping stuff I've read. I felt like I barely breathed for that part of the book.

Content warning, should you need it: there is violence aplenty in this book, and that violence is brutal and wrenching, and some passages I confess were hard to read (I am not great with gore even though I do love horror).

And oh yeah, SPOILER ALERT: pretty much everything goes to absolute hell for the four guys at the center of this book. It goes to hell in spectacular fashion, with such relentless and inescapable force that it occasionally veers into black comedy. One of the things I love about the book, and Stephen Graham Jones's work in general, is how it allows those moments of gruesome levity to shine through the horror and tragedy, like a glint of teeth in a bloody maw, I suppose.

The four men are not terrible-bad people. They are not cartoonishly evil. They did do a bad thing in their youth, and they knew it was bad, and it's haunted their thoughts since. When the book starts, that haunting presence is in the process of becoming a lot more real, though.

That everyday ordinariness of these men is one of the things that really makes this book work for me. There's a layer of extra horror added by the fact that they are not irredeemable a-holes, but regular guys who did something bad and then went on with their lives as best they could (with varying results). And when the ghost of their past misdeed takes physical shape and returns to wreak havoc in their world, they panic. They do stupid, ill-advised, and terrible things in an effort try to fix the situation. Of course, they only keep making it worse. Part of both the tragedy and dark comedy of this book is following these men as they keep fighting against the thing they helped bring into this world, trying to free themselves, trying to avoid retribution, and in the process (mostly) dragging themselves down further into the abyss.

What else? Well, there's a dramatic and VERY high-stakes basketball game, there's a sweat-lodge ceremony that goes spectacularly wrong, there are innocent people and creatures caught up in the madness, there are haunting memories of hunting in winter, and devastating memories of trains, and there's that chase scene in the snow that just... murdered me. I also need to say that as a reader, one of the joys of this book is seeing small details pay off in satisfying, though often horrific, fashion as the story plays out.

I love this book for the way the everyday spirals into horror, the way guilt and fear seep into everything, and for the way it allows the characters brief moments of grace before it's all torn apart again.

Buy The Only Good Indians.