These are all complete trilogies, so if you start reading and you love the first book (I did), you can just keep reading and not have to wait to get your "next-book" fix.
🕮 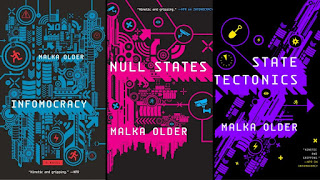 The Centenal Cycle by Malka Older

The official blurb for the series:

In Malka Older’s Centenal Cycle, a series of cyberpunk technothrillers beginning with Infomocracy, Information (think Google on steroids) balances the paradoxes of a global micro-democracy. Mishima and Ken face election fraud, man-made and natural disasters, and deadly espionage from powerful rogue governments, while kindling a romance. For fans of The West Wing, Person of Interest and Mr. Robot.

My review of Infomocracy

Infomocracy is a thought-provoking, fast-paced political thriller / near-future science fiction novel. The story hooked me from the start with an interesting and motley collection of characters, who are spread out all over the world, but are all involved in the ongoing election campaign in various ways.

As the story progresses, and as it becomes more and more apparent just how high the stakes are in the political game being played, I got sucked in completely, and ended up speeding through the last half of the book to find out what would happen.

Anyone with even a passing interest in political science, the machinations behind the scenes in the world of politics, or cyberpunk-ish scifi should definitely read this book. I studied political science at uni, and I can’t think of many other books in recent years that have triggered my political-nerd brain more than Infomocracy. As much as this is science fiction, it is also very much a political thriller of the best kind, where actual, believable political goals and machinations drive the action.

Interestingly enough, Older’s future-world is neither a dystopia nor a utopia, but a muddled, complex, multi-faceted, conflicted world, much like the one we find ourselves in right now.

Both the characters and the world they inhabit are fascinating and I liked the way Older allows each character to come into focus slowly and organically: we learn about them from their actions and interactions, their choices, and their reactions to what’s happening in the world.

Another important character in the story is the political system, and what drives the action is how the various actors – individual, political, social, and economic – try to protect, control, undermine, manipulate, or even overthrow that political system. This is the part of Infomocracy that really triggered my pol-sci brain: what if there were no nation states? what if everyone on earth were hooked into a giant, globally controlled information system and elections were held worldwide? what if the current nation-states disappeared and a new system was put in place that radically altered people’s allegiances and electoral choices?

Older’s world is close enough to our own that everything feels possible. Her vision of a society where everyone is connected to “Information” 24/7 is not hard to imagine: it’s pretty close to what our reality is already like with social media, though the interface in the book is more organic and complete. And some things in Infomocracy feel almost uncomfortably close: electoral interference, vote manipulation, the targeted use of propaganda, political “dog whistles”, and people having their worldview shaped by “information bubbles”.

While many of these things are obviously problematic, I also found myself falling in love with many aspects of Older’s world – specifically: global unity combined with a democratic system that ignores nation states, and is instead organized on a smaller scale. Of course, as Older points out, power structures (like the military industrial complex, for example) don’t magically disappear in this new system, they just find new ways of influencing politics, or are replaced by new power structures.

If you love this book, dive right into the sequel, Null States. It moves at a thriller pace with international intrigue galore, a political murder mystery to solve, and romance to boot… so, yeah, it's a page-turner. I also love how this book introduces the “edges” of the Information-world – the Null States, that exist outside of Information’s data-sharing system. Book three, State Tectonics, is a riveting conclusion to the story AND the very best kind of science fiction: a book that makes you think differently about the future and the present. (Read my review of State Tectonics at B&N.)
Get the Centenal Cycle books.
🕮

The Bone Universe by Fran Wilde

Official blurb for the series:

In a world where the towers of a city are grown from bone, and people live high among the clouds, Kirit desires nothing more than to sail the skies on a pair of wings. But fate places her at the head of a revolution that not only overthrows society but tears her family apart in Fran Wilde’s imaginative fantasy Bone Universe saga.

My review of Updraft:

Fran Wilde’s Updraft pulled me deep inside a rich, living-breathing fantasy world that is exceptionally vivid and detailed: a world inhabited by a people living in sky-high towers of bone that grow out of the ground; a world where people never touch the earth, but rather fly between the towers on crafted wings; a world where people live and die by their wings, by their ability to ride the winds and currents; and where being “wingless” or “cloudbound”, is something to be feared. It is a world with its own history, traditions, and laws. And it is also a world with its own monsters: ravenous skymouths lurking in the air, almost invisible to the naked eye, but capable of killing and maiming.

The story launches you straight into this world – into Kirit’s world, to be specific – because it is through her eyes that we experience it and come to know it, and Kirit is another reason to love Updraft.

One of the most interesting things about Kirit is how unsentimental she (and by extension the story) is. A lot of terrible things happen to Kirit, but at every turn, Wilde avoids softening or weakening her character. Kirit is shown to be both inexperienced and fallible at time, but she always remains a capable person. No matter how bleak and terrible things get, Kirit is always looking for a way to use the situation to whatever advantage she can. She is resourceful and refreshingly ambitious from the first page of the story, and Updraft explores how she ends up using those strengths in a much different way than she initially imagined: to shape her own life and the world around her.

While I really like the physical world Wilde has invented in Updraft, what I like even more is the society that exists within that world. Updraft deftly explores the inner workings of this society: its often harsh social rules and laws; how people deal with conflict and dissension; its punishments and rewards; the loyalties to towers and family; and the hard choices that have to be made in a world with limited space and resources: where do the old and infirm end up? what happens to law-breakers? The secretive world of the Singers is maybe the most fascinating part of this society, and the deeper Kirit goes into that hidden world, the better and more gripping the book gets.

Another thing I like about Updraft is Wilde’s prose: it’s inventive and carefully crafted to fit the world. (Wilde wrote a great piece for TOR.com about the importance of language, and it’s well worth a read: ‘Change The Language, Change The World’.)
If you love it, then check out the sequel, Cloudbound. I won't say too much in order not to spoil things if you haven't read it, but this book will knock your socks off in the last few chapters. Book three, Horizon, brings the series to a fantastic conclusion as Kirit, Nat, Macal, and the others enter a new world…that might not be very hospitable.
Get The Bone Universe books.
🕮 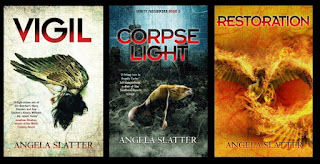 A rich and exciting new urban fantasy, perfect for fans of Harry Dresden and Peter Grant.
Verity Fassbinder has her feet in two worlds.
The daughter of one human and one Weyrd parent, she has very little power herself, but does claim unusual strength and the ability to walk between one world and the other as a couple of her talents. A rarity, she is charged with keeping the peace, and ensuring the Weyrd remain hidden.
But now Sirens are dying, illegal wine made from the tears of human children is for sale - and in the hands of those who hold to old, dangerous ways - and someone has released an unknown and terrifyingly destructive force on the streets of Brisbane.
Verity must investigate, or risk ancient forces carving the world apart.

Books in the series:

My review of Vigil:

Vigil is the start of a hugely entertaining and absolutely gripping supernatural crime / dark fantasy series set in present-day Australia. The book has a wicked sense of humour, and there is heaps of myth and fairytale woven into the action, plus Angela Slatter definitely knows how to deliver suspenseful and intricately crafted murder mystery goodness.

The book introduces us to a rich and convincing world existing just beneath or beside the everyday world most people know, and it's inhabited by a cast of odd, frightening, entertaining, and occasionally horrifying creatures – both human and…not so human.

Slatter excels at creating relatable and complex main characters that feel real enough that they might step off the page. In this book, that is Verity Fassbinder: a woman haunted by her past (her father was a less than savoury character to say the least), with a sometimes cranky disposition (who can blame her, what with all the shape-shifting, magic-wielding nutcases he has to deal with), and a sharp tongue that occasionally…OK, often...gets her into trouble. All of that makes her a wonderful protagonist, and as the story unfolds and the mystery deepens (who is killing those sirens? what is up with that awful wine made from suffering children?), we get to delve deeper and deeper into the things that make Verity tick. Verity’s sense of humour really struck a chord with me throughout the book, and my favourite Verity-line might just be: “Trust me. I almost know what I’m doing.”

The dark fantasy element of the story is strong, intertwining creatures of myth, legend, and fairytales, all of them living just beneath the surface, or on the margins of “normal” society in Brisbane. I really loved how Slatter puts her own spin on many of the Weyrd: sirens, the boatsman, norns… they are all just a bit different than what you might expect. (Some of them run great coffee shops, for example.)
Vigil is a murder-mystery page-turner with literary, dark-fantasy heft and a cast of characters you want to follow into whatever trouble, and realm, they might end up in next.
If you're hooked, just dive right into Corpselight where Verity is pulled deep into a strange and dangerous mystery with strong connections to her own, and her family's, past, introducing us to angels, sirens, “kinderfressers”, shape-shifters, and a whole lot more. The third book, Restoration, is an absolute smashing good read as well, and includes some of my favourite angel-scenes in literature.
Get the Verity Fassbinder books.
(Also available from Amazon.)
🕮

Book cover details (because they're gorgeous):