Book review: THE SPACE BETWEEN WORLDS by Micaiah Johnson 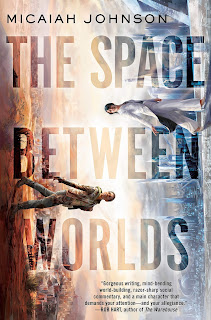 The Space Between Worlds by Micaiah Johnson

Multiverse travel is finally possible, but there’s just one catch: No one can visit a world where their counterpart is still alive. Enter Cara, whose parallel selves happen to be exceptionally good at dying—from disease, turf wars, or vendettas they couldn’t outrun. Cara’s life has been cut short on 372 worlds in total.

On this dystopian Earth, however, Cara has survived. Identified as an outlier and therefore a perfect candidate for multiverse travel, Cara is plucked from the dirt of the wastelands. Now what once made her marginalized has finally become an unexpected source of power. She has a nice apartment on the lower levels of the wealthy and walled-off Wiley City. She works—and shamelessly flirts—with her enticing yet aloof handler, Dell, as the two women collect off-world data for the Eldridge Institute. She even occasionally leaves the city to visit her family in the wastes, though she struggles to feel at home in either place. So long as she can keep her head down and avoid trouble, Cara is on a sure path to citizenship and security.

But trouble finds Cara when one of her eight remaining doppelgängers dies under mysterious circumstances, plunging her into a new world with an old secret. What she discovers will connect her past and her future in ways she could have never imagined—and reveal her own role in a plot that endangers not just her world but the entire multiverse.

The Space Between Worlds is a deeply engaging, thought-provoking book that tells a riveting story with a cast of captivating characters. While it explores some pretty common themes in speculative fiction, like travel between alternate universes and a post-apocalyptic society, what sets it apart and kept me turning the pages, are the unique angles and perspectives Johnson brings to these familiar themes. For example, the basic premise of what makes travel between worlds possible--that you can only travel to worlds where the other version of you is not alive--adds a layer of tragedy and desperation to the enterprise, and to the characters. The story's protagonist, Cara, is well aware that she did not survive in most worlds, and this knowledge impacts how she thinks about the world and herself. The rarity of her survival is what makes her singularly useful to the people she works for, but it also gives her a sense of survivor's guilt that goes even deeper than the reader initially realizes.
Cara is a fantastic protagonist, wounded and flawed, daring and capable. While she can be combative and willing to butt heads with pretty much anyone, the fact that she grew up in poverty (and with an abusive relationship as added baggage), means that she is very aware of what she stands to lose if she challenges the system. She is also refreshingly fallible. For all her strengths, she does not have it all figured out, and her miscalculations give her character a believable edge.
One huge source of tension and danger in the book, is that there are two crucially important secrets at its center: there is the terrible, deeply personal secret about herself that Cara is desperate to keep from everyone; and there is the larger secret that is being kept from her, about the nature of her work and the long-term goals of the Eldridge Institute. The way these secrets are ultimately revealed and how they influence the characters and the plot is one of the best things about the book.
Another thing I love about The Space Between Worlds, is how multiverse travel is exploited as a business by its inventor, rather than being treated as some kind of high-class science project. In the book, multiverse travel is used to collect data that can help advance the power and financial positions of people in the world where it was invented. It's reminiscent (at least for me) of how companies in our own world profit from data-mining people's social media and Internet presence, and how that data can then be used to influence society and politics on a grander scale. I like how this very familiar kind of greed and callousness is a driving force behind the multiverse-travel enterprise, rather than some outlandish "I want to rule the world" Bond-villain scheme.
Beyond the stellar cast of characters that show up in different iterations across the multiverse, the world-building in this book is also outstanding. While the society is set in a landscape, and a world, that bears many of the hallmarks of the post-apocalypse (being exposed to sunlight is dangerous, the environment is universally ravaged, etc.), the books doesn't wallow in how awful it all is compared to the past. Rather, the book delves into how Cara and the other characters, and the population in general, have found ways to live in this broken, changed world. There's a clear-eyed realism to it all as people go about living, rather than pining for a lost time they haven't even experienced.
Johnson's characters are complex and compelling no matter which world we encounter them in, and the book explores how even small changes--personal choices, accidents, good or bad luck, and minor variations in circumstances--can ripple through lives, causing fundamental shifts in how characters are shaped and how they shape the world in turn. Cara's relationships with some of the main characters in the various worlds are fascinating because of this: people who look and sound and sometimes even act like she would expect, end up having very different motivations, fears, and scars than Cara might have presumed.
Oh, and there's that whole business of the presence that lurks in the "space between worlds" that Cara traverses when she goes from one world to the next. There's a scene where "the rules" of multiverse travel are broken and someone (not Cara) pays the price for that transgression, and that scene absolutely blew my mind.
The Space Between Worlds is a science fiction treat. There's a good reason it won the Compton Crook Award. If you love science fiction, if you love an original take on multiverse travel, then this book is for you.
🕮

Buy The Space Between Worlds.