Ursula K. Le Guin is one of my all-time favourite authors, and I know that she has hugely influenced me as both a reader and a writer. I read the first three books (A Wizard of Earthsea, Tombs of Atuan, and The Farthest Shore) as a tween and teen, and at the time, the books shook me to my core like few other books I’ve read. The power of her stories, her writing style, her language, and her unique storytelling voice all made a huge impression on me. The Tombs of Atuan in particular is a book that moved me so deeply that I believe it has become a part of my own “writing DNA”.

The Earth is beautiful, and bright, and kindly, but that is not all. The Earth is also terrible, and dark, and cruel. The rabbit shrieks dying in the green meadows. The mountains clench their great hands full of hidden fire. There are sharks in the sea, and there is cruelty in men’s eyes. And where men worship these things and abase themselves before them, there evil breeds; there are places made in the world where darkness gathers, places given over wholly to the Ones whom we call Nameless, the ancient and holy Powers of the Earth before the Light, the powers of the dark, of ruin, of madness….

Le Guin has such a restrained and powerful way of writing: her stories are lean and trim without unnecessary chatter or extraneous explanations. Her prose is poetic and straightforward at the same time, and she is able to express so much with very little. The quote above from The Tombs of Atuan (part of the Earthsea cycle) is a prime example: Ged’s way of speaking is so evocative and expressive that it feels like a kind of magic in itself, and since he is a wizard that is just as it should be.

When I read a Le Guin book or short story, I often re-read passages several times just because the language is so sparse and beautiful – there’s a power there that goes beyond the story itself.

Le Guin wrote primarily fantasy and science fiction, so she didn't always get the mainstream respect she so richly deserved, but if I were handing out Nobel prizes in literature, she would have won that award for sure. 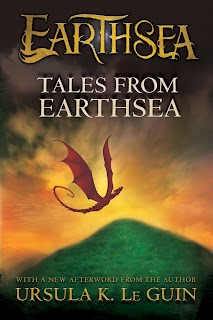 In Tales From Earthsea, Le Guin re-visits and expands her vision of the world and the history of Earthsea, and also delves deeper into its lore and its magic. The original trilogy took place in a time when the majority of the people of Earthsea saw magic as something only men could (and should) wield: “Weak as women’s magic, wicked as women’s magic”, as the saying goes in the stories. However, in Tales From Earthsea it is revealed that women once wielded magic powers that rivaled the men’s, and that both women and men founded the magic school on the island of Roke – a crucial center of power that later allows only men to be educated as wizards.

As you’d expect from one of the best fantasy writers in the world, Tales From Earthsea is an outstanding collection of short stories. Le Guin’s language is as beautiful as ever; her stories are captivating from the first word and sentence; and the characters are just as strong and alive as they are in her novels. Two of the things that have always appealed to me in Le Guin’s work are her lack of sentimentality, and her reluctance to create characters that are either simply good or simply evil. Instead, the characters in her stories are flawed and damaged and often difficult people to deal with, and that is why they feel so real, and close, and true.

If you’ve read the other Earthsea books, Tales From Earthsea is a bit like returning to a favourite place: you get to re-visit familiar places and events, while Le Guin gives you a new perspective on, and new insight into, the vivid world she’s created. It's both fascinating and inspiring to see the way Le Guin was re-thinking and re-shaping the world of Earthsea in her later years. Without rebuking her older work or rigidly defending it, the newer books are in conversation with the older ones, and she allows herself to change her mind about some of the choices she made as a younger writer.

In ‘The Finder’ Le Guin tells the story of how the school of magic was established on Roke island; while ‘Darkrose and Diamond’ is a tale about a troubled romance between the daughter of a witch and the son of a merchant. ‘The Bones of the Earth’ (one of my favourites in this collection) is the true story of how the legendary wizard Ogion the Silent handled a massive earthquake – a part of Earthsea-lore that hearkens back to the first books.

‘On the High Marsh’ is vintage Le Guin: a beautiful tale with a hidden darkness at its core, about a mysterious healer haunted by a past he can’t remember, and what happens when he arrives in a remote village where the livestock are dying.

For me, the standout story in the book is ‘Dragonfly’. The main character in this short story is a woman named Irian who is driven by a fierce need and yearning to find out what her true destiny is. And in order to find the answers she seeks, Irian tries to enter the Wizard-island of Roke even though women are strictly forbidden there. It’s a fantastic story in its own right, and it also ties together the final two Earthsea novels: Tehanu and The Other Wind.

Get Tales From Earthsea. 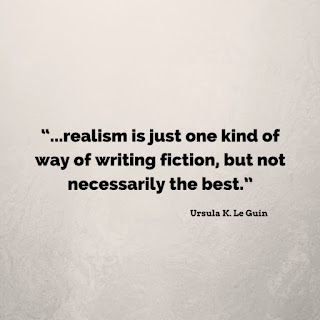 Den of Geek has an interview with Ursula K. Le Guin from 2015 that is a must-read. I’ll share two quotes to give a flavour of the thing, but it’s very much worth it to read the entire piece.

First, one of her answers dealing with snobbish attitudes towards fantasy and science fiction. (She discusses this at length in the interview, including how Margaret Atwood’s publisher basically forbade her from calling her science fiction books, science fiction.)

You’ve spoken and written very cogently for decades about the snobbery that imaginative literature – science-fiction and fantasy – has from the literary establishment. Do you think we’ll ever reach a point when those snobbish attitudes don’t exist?

Some people have to be snobs, don’t they? They can’t exist without looking down on something. There will always be such people, but tomorrow the fashion could change and then we’ll be looking down on realism!

The good thing is that in my life, we really have come quite a long way to return to sanity in admitting that imaginative literature is probably the oldest kind of storytelling and will always be with us – thank goodness – and that realism is just one kind of way of writing fiction, but not necessarily the best. Certainly not automatically the best, which is what the snobbery thing was to do with. If it was realistic it was inherently better than anything imaginative and therefore the silliest realist was better than Tolkien. Well, it just, it won’t wash, as we say.

My question then is, do the books that you eat now nourish you as much as the ones you ate when you were a child and a teenager?

Oh, no no. That’s such a good question. Things that kids read and the thing that hits the kid as a kid gets into their bones. The things I read now get into my head, sure enough. I think about them. I might read something and it’ll turn into a poem next month or something, but that early stuff, that becomes a part of your whole being in a different way, and you can’t get rid of it.

Read the whole interview at Den of Geek.

The second interview is also from 2015, and it's from Interview Magazine. An excerpt:

SICHA: In the book you return to this idea of writing for art’s sake, which is very much, I feel, out of vogue. We’ve gotten accustomed to talking about money and the commerce of writing and how you should be treated as a writer, and it’s sort of hysterical when you sit back and think about it.

LE GUIN: And there are so many guidebooks to that kind of writing: “How to be a success,” in other words. But I certainly didn’t feel like I had anything to add there, since the way I came into writing was a pretty sure way to not be a success.

SICHA: A few people may talk about the “craft of writing,” but they sound phony. The way you put it is very realistic: that this is an important thing to do if you care about writing. 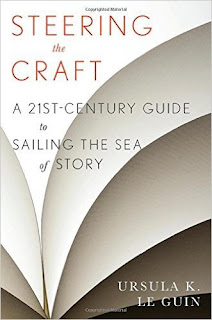 Le Guin's book on the craft of writing is, Steering the Craft, is, as you would expect, excellent. Some quotes from the book:

And if you want more Le Guin, check out the wonderful documentary The Worlds of Ursula K. Le Guin.