KAI ASHANTE WILSON was the 2010 Octavia Butler scholar at Clarion writing workshop in San Diego. He won the Crawford award for best first novel of 2016 [my note: this was The Sorcerer of the Wildeeps], and his works have been shortlisted for the Hugo, Nebula, Shirley Jackson, Theodore Sturgeon, Locus, and World Fantasy awards. ---- Kai Ashante Wilson lives in New York City.

I think the first story I read by Wilson was the novelette "The Devil In America" at TOR, which is one of the most gutting and powerful pieces of fiction I've ever read. I'll quote the blurb here, but the story is pretty much required reading as far as I'm concerned:

Scant years after the Civil War, a mysterious family confronts the legacy that has pursued them across centuries, out of slavery, and finally to the idyllic peace of the town of Rosetree. The shattering consequences of this confrontation echo backwards and forwards in time, even to the present day.

Nisi Shawl wrote an insightful essay in 2018 on this novelette at TOR.com--Sense from Senselessness: Kai Ashante Wilson’s “The Devil in America” , and you might even want to read Shawl's essay before you read Wilson's story.

Using a nontraditional format, Wilson begins his story about an imagined nineteenth-century tragedy with a twentieth-century father’s reflections on real life anti-black violence in his own time. Just the victims’ names—Emmett Till, Amadou Diallo, Arthur McDuffie—evoke unavoidable brutality, the sort of waking nightmare that many an African American knows lies just below the surface of the mundane world. The reading doesn’t get any easier when Wilson brings his narrative skills fully to bear on describing the destruction of the fictional Rosetree.

So be warned: "The Devil In America" is a brutal and viscerally disturbing read. It is also beautiful and magical in the truest, deepest sense of the words.

Kai Ashante Wilson has published several short stories, and I'll leave links for those at the end of this post, but some of his best work comes in the novel The Sorcerer of the Wildeeps and the novella A Taste of Honey. These two stories are both set in the same world and both are science fantasy, at least in my opinion, though when I first read them, they felt more like fantasy than science fiction. However, as you will see if you read them, there is scifi in that fantasy, even when you might not see it at first. 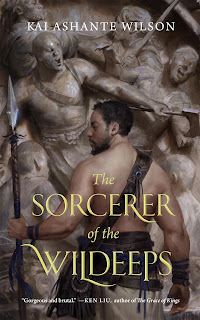 The Sorcerer of the Wildeeps

Since leaving his homeland, the earthbound demigod Demane has been labeled a sorcerer. With his ancestors' artifacts in hand, the Sorcerer follows the Captain, a beautiful man with song for a voice and hair that drinks the sunlight.

The two of them are the descendants of the gods who abandoned the Earth for Heaven, and they will need all the gifts those divine ancestors left to them to keep their caravan brothers alive.

The one safe road between the northern oasis and southern kingdom is stalked by a necromantic terror. Demane may have to master his wild powers and trade humanity for godhood if he is to keep his brothers and his beloved captain alive.

(Fair warning: this book absolutely floored me the first time I read it. Then I immediately read it again, and it was just as good if not better when I re-read it. It widened my perception of how speculative fiction could be written, and what you could do within the genre. Hence, I am pretty much unable to write or talk about without raving about how much I love it, so be prepared for that.)

I’m not quite sure what to say about Kai Ashante Wilson’s glorious, enigmatic, and utterly spell-binding The Sorcerer of the Wildeeps that will do it justice. Maybe I should just say this: read it.

Read it for a story-line that never goes where you think it might. Read it for characters that you desperately want to stay with, even when the story is over. Read it for Wilson’s intoxicating and dizzying prose that brilliantly flexes between crude and exquisite, earthy everyday and divinely terrifying. Read it for the sheer pleasure of a writer who masterfully bends, twists, and sculpts language to conjure and create another world – familiar enough in some ways to feel like it has to be our own world, yet so strange beneath that almost-familiar veneer that you’re gripped by a sense of vertigo.

I could read Wilson just for the beauty and strength of the prose, but there is a compelling story here, too, though it’s hard to describe without giving too much away. A bare bones version would be something like this: Demane has left his distant homeland behind and now lives in a strange country, among people who don’t quite know what to make of him, though they’ve seen enough of what he can do to call him ‘sorcerer’. As the story begins, he has been hired to help protect a merchant caravan, set to cross the strange and dangerous place called the Wildeeps – “where many worlds overlap”. One of the other men guarding the caravan is ‘the Captain’, a fighter of extraordinary skill who shares a deep connection, in more ways than one, with Demane. As the caravan approaches and enters the Wildeeps, a terrifying creature begins to stalk the men, and Demane’s true powers become crucially important to their survival.

Still, that is only the surface. What goes on beneath all that, inside all of that, is so much more, as Wilson’s fragmented tale keeps shifting and rearranging the puzzle pieces, revealing the many layers and the true depth of the world, and as the reader slowly realizes the true strangeness of the Wildeeps. I will say this: whatever you expect from The Sorcerer of the Wildeeps, I have a feeling the story will surprise you.

Kai Ashante Wilson’s writing is addictive: shifting effortlessly between crude and base, ornate and almost ceremonial in tone. In some ways The Sorcerer of the Wildeeps reminds me of Gene Wolfe's Soldier of the Mist. Just like Wolfe, Wilson manages to tell a fragmented and often utterly mystifying tale while keeping my rapt attention from the first paragraph to the last.

The Sorcerer of the Wildeeps is a brilliant work of fiction, and one of my all-time favourite books. 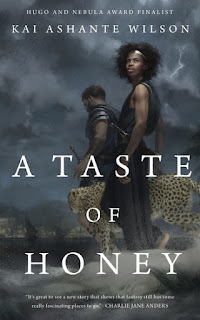 A Taste of Honey

Long after the Towers left the world but before the dragons came to Daluça, the emperor brought his delegation of gods and diplomats to Olorum. As the royalty negotiates over trade routes and public services, the divinity seeks arcane assistance among the local gods.

Aqib bgm Sadiqi, fourth-cousin to the royal family and son of the Master of Beasts, has more mortal and pressing concerns. His heart has been captured for the first time by a handsome Daluçan soldier named Lucrio. in defiance of Saintly Canon, gossiping servants, and the furious disapproval of his father and brother, Aqib finds himself swept up in a whirlwind romance. But neither Aqib nor Lucrio know whether their love can survive all the hardships the world has to throw at them.

After reading The Sorcerer of the Wildeeps and all the short fiction by Kai Ashante Wilson I could get my eyes on, A Taste of Honey reaffirmed my opinion that Wilson is one of the most interesting and one of the best writers in speculative fiction today.

To be sure, A Taste of Honey is a very different kind of story than Wildeeps. It is set in the same world (though not in the same time period), but if The Sorcerer of the Wildeeps was a thrilling fantasy tale wrapped around a love story, then A Taste of Honey is a thrilling love story wrapped around a fantasy tale. (The fact that Wilson manages to pack these kinds of epic fantasy stories into the short novel / novella format is another one of his magic tricks.)

The story’s central characters, Aqib and Lucrio, fall in love (and lust) more or less first sight, and then have to maneuver around all sorts of obstacles to be able to see each other. While telling us that love story, Wilson also tells us the tale of the world and the society they live in, and the tale of the grander schemes going on within the world. There are god-like powers being wielded, magic, palace intrigue, psionics, and mathematics. (The way Wilson weaves together science fiction and fantasy when it comes to what is technology and science on one hand, and what is magic on the other, is one of the hugely enjoyable aspects of this story.)

All of that world-building is woven into a story that grows ever more desperate for the two lovers, because the clock is ticking: Lucrio has to leave Olorum ten days after meeting Aqib, and by the time the ten days are up, things come to a head in quite a dramatic fashion. And the end? Well, the end…is the kind of twist that makes you want to read the story all over again.

Wilson's world-building is extraordinary. I can’t help but, again, compare Wilson to Gene Wolfe. Like Wolfe, Wilson drops you into the story and then explains the world from the inside out. Wilson’s talent for dialogue is also showcased in A Taste of Honey: characters speak different languages and dialects, switching between them depending on need, company, and situation. (One of my favourite details in the story is how Lucrio has learned the language of Olorum, but is unaware that he has learned the more “uncouth” version of the language.)

I tore through this book, and in the end, I was left with a craving for more: especially more stories from Wilson that are set in this world of gods and men, science and magic, mathematics and psionics. A Taste of Honey is a blistering good read, and while there hasn't been any new fiction from Wilson for a while, I do hope there is more forthcoming.

Cover art for both The Sorcerer of the Wildeeps and A Taste of Honey is by Tommy Arnold.