One of my favourite writers, who also happens to be a pretty amazing human being, is Julie C. Day. Day holds an MFA in Creative Writing and a M.S. in Microbiology from the University of Massachusetts at Amherst. Her short fiction has been published in several magazines, journals, and anthologies, including Black Static, The Dark, Podcastle, Interzone, and the Cincinnati Review. Her brilliant, weird, dark fantasy novella, The Rampant, was released in 2019 by Aqueduct Press, and was a Lambda Literary Award finalist. Her short story collection, Uncommon Miracles, was released by PS Publishing in 2018.

Day is also the Editor-in-Chief of the charity anthology Weird Dream Society, released in 2020. All proceeds from that anthology goes to RAICES, a nonprofit education and legal services organization that envisions a compassionate society where all people have the right to migrate, and human rights are guaranteed.

Right now, and throughout 2021, Day is hard at work on a project called Stories of Driesch, which is being published in the form of one new story every month this year at the Vernacular Books website. At the end of the year, the stories will be gathered up and available all together as a mosaic novel. What I've read of Driesch so far is compelling and fascinating, and set in a uniquely imagined sci-fi/cyberpunk world. 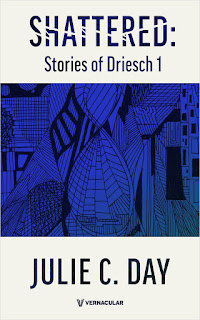 The official blurb for the first story, "Shattered":

“Shattered” is the first in a series of 12 stories set in the city of Driesch. In this cyberpunk-ish city, consciousness is a commodity. And the self is an augmented, fractured creation. Death detectives work with memories in storied Limm-Glass. Children are outfitted with secondary Glassed-personalities. Black market operators acquire and trade virtual Glassed-slaves, and man-made tools utilize modified and unmodified versions of both the living & the dead.

You can read more about the already-published stories on Julie C. Day's website, and then you should head over to Vernacular Books and read the story-instalments:

If you want to read more of Julie C. Day's work, I highly recommend both her short story collection, Uncommon Miracles, and her novella, The Rampant. 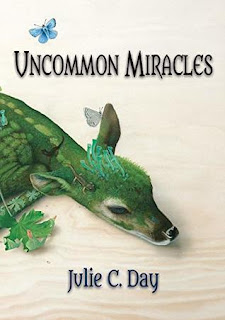 A grieving man travels through time via car crash. A family of matriarchs collects recipes for the dead. A woman gains an unexpected child in the midst of a bunny apocalypse. An outcast finds work in a magical slaughterhouse. Julie C. Day’s debut collection is rife with dark and twisted tales made beautiful by her gorgeous prose and wonderfully idiosyncratic imagination. Melding aspects of Southern Gothic and fabulism, and utilizing the author’s own scientific background, Day’s carefully rendered settings are both delightful and unexpected. Whether set in a uniquely altered version of Florida’s Space Coast or a haunted island off the coast of Maine, each story in this collection carries its own brand of meticulous and captivating weirdness. Yet in the end, it is the desperation of the characters that drives these stories forward and their wild obsessions that carry them through to the end. It is Day’s clear-eyed compassion for the dark recesses of the human heart and her dream-like vision of the physical world that make this collection a standout.

One of the first stories I read by Julie C. Day was “One Thousand Paper Cranes” in Kaleidotrope. It’s included in this collection, and it’s a remarkable story about siblings, hope and grief, the longing for the world to change, and the visceral horror of being changed when society decides to “make you better”.

As in many of her stories, “One Thousand Paper Cranes” skillfully subverts the familiarity of everyday life with darker shades of the weird and the strange. I love the feeling I often get while reading Day’s stories, that you know the places she describes, that you might even know people like these, but you still feel as though anything could happen, or has already happened. That unsettling feeling permeates Day’s work, and it’s one of the reasons I find her stories so interesting and compelling.

The stories included in Uncommon Miracles straddle the lines between science fiction, fantasy, horror. One thing that binds them together, and sets Day’s work apart, is her characters. She creates characters that may be fragile, flawed, and troubled, but she always describes them with a clear-eyed and unsentimental sense of compassion and understanding that adds to the richness and emotional depth of her stories.

There are stories in this collection about rabbits as apocalyptic emissaries, the difficulties of building a stellar nursery at home, and about Margery who keeps her lover in a hamster cage. As you might surmise from this, you never know what or who you might encounter in a story by Day, or how the everyday world will be twisted and turned into something new, eerie, and unsettling, but then, that’s exactly what makes this collection so very good.

(Note: the beautiful cover art is “Fawn” by Tiffany Bozic.) 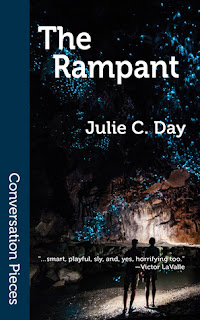 The Rampant is a queer-girls-in-love, coming-of-age short novel that is harrowing, heartbreaking, and darkly funny.

Christianity it turns out got a whole lot of things wrong. It’s ten years since the hordes of old-world Sumerian gods arrived in Southern Indiana ready to kick off the end of the world. Massive tornadoes, tsunamis, government collapse: it all started out so strong, but the Rampant, the final herald of the apocalypse, failed to show. Both people and gods have had to adjust.

Sixteen-year-old Emelia Bareilles and Gillian Halkey have spent most of their childhood stuck in this seemingly never-ending apocalypse. Now the two friends are resolute: they will travel into the lands of the dead and force a change.

Riffing on fragments of historical text, including the Epic of Gilgamesh, The Rampant uses and refutes the known details and rules of the Sumerian underworld. As they travel through the lands of the dead, Emelia and Gillian meet loved ones and strangers trapped in a system they didn’t create. Each step makes them more determined to help create a better, godless world. In the end this is a story about the inequities of power, human self-determination, and the various ways in which we love each other.

As you might be able to tell from the synopsis, this novella is one heck of a ride. It's funny, it's dark, it's utterly and beguilingly strange, and deeply heartwarming, all at the same time.

I have never read another apocalyptic story quite like this, with the way it blends teenage sass and romance with Sumerian mythology and end-of-the-world angst. Day has fashioned a fast-paced horror/dark fantasy story about two queer girls in love who try to save the world by bringing about the Sumerian Rapture (which might seem to be an odd way of saving the world, but hey, in this case it might actually work!).

The characters are wonderful in all their fiery, gnarly teen girl glory, and their “road trip” adventure through the underworld is phantasmagorically trippy. Day keeps the story moving at a fast clip, and one of the best things about this tale is the often hilarious, sometimes brutally honest and forthright dialogue between the two main characters. The bond between Emelia and Gillian is what kept me hooked from the first page to the last.

Find out more about Julie C. Day on her website.