#FridayReads - it's all about Ray Bradbury

One of the first science fiction books I remember reading as a child, was a short story collection: The Martian Chronicles by Ray Bradbury. Together with Tolkien's Lord of the Rings and Le Guin's original Earthsea trilogy, this was pretty much what ignited my love for speculative fiction. 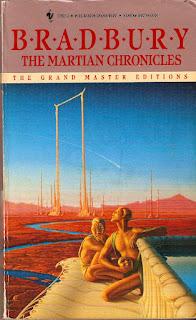 The Martian Chronicles is an old book now, and like many other works of science fiction and fantasy from the olden days, it's a bit dated in parts. It was published in 1950 and the individual stories were first published earlier than that in various magazines, then gathered together in a book, and given a framing narrative recounting the history of humanity’s exploration and colonization of Mars.

There is so much I love about this book: the beauty of Bradbury’s prose, the creeping terrors that often lurk beneath the surface of seemingly everyday places and situations in his stories, and the blend of science fiction, horror, and poetry that permeates the whole work. This is not hard science fiction -Bradbury was never that – he is always more interested in people than technology.

Like I said, I've been a Bradbury fan since I was a child, and I love his short fiction. For this #FridayReads post, in addition to The Martian Chronicles, I have a list of 10 of my favourite Ray Bradbury short stories (as previously seen on my website). Many of these stories have no doubt influenced and inspired my own writing over the years.

1. The One Who Waits

This story was included in the short-story collection The Machineries of Joy, and to me, it’s not just a quintessential Ray Bradbury story, it is THE quintessential science fiction short story. It’s ominous and unsettling right from the start:

I live in a well. I live like smoke in the well. Like vapor in a stone throat. I don’t move. I don’t do anything but wait. Overhead I see the cold stars of night and morning, and I see the sun. And sometimes I sing old songs of this world when it was young. How can I tell you what I am when I don’t know?

Bradbury is skilled at turning something we’ve been brought up to think of as innocent – like mushrooms and babies, for example – into something sinister. In "The Veldt", child’s play becomes deadly, and the relationship between two children and their parents takes a horrifying turn. This story also includes a playroom reminiscent of Star Trek TNG’s “holodeck”. It’s a true Bradbury classic that has been adapted for TV several times (by NPR, and Canadian television for example) and has also been turned into a movie. It was included in The Illustrated Man.

This short story is another excellent example of how Bradbury can create a sense of ominous dread. A pregnant woman begins to suspect that the child she is carrying is evil. A ridiculous notion, of course. Right? Except that it turns out she’s correct… It was included in the anthology Dark Carnival, and can also be found in several other Bradbury collections.

This is one of the first Bradbury stories that I remember reading as a child and it’s been stuck in my mind ever since. An alien invasion that takes place in people’s basements? Of course. This story can be found in the Best-of-Bradbury collection The Stories of Ray Bradbury.

Without a doubt one of the Bradbury stories that has made the biggest impression on me. The story is taken from Bradbury’s amazing The Martian Chronicles. In this particular tale, an expedition from Earth to Mars encounters a town that seems eerily, yet comfortingly, familiar to them. It’s even populated by long-lost relatives and family! Of course, it doesn’t have a happy ending.

Yet another short story from The Martian Chronicles. This time, an elderly couple from Earth have settled on Mars and one night they encounter a person they think is their long-dead son. The sense of sadness and foreboding that permeates this short story is what really gets to me:

The cold wind blew and the thin rain fell upon the soil and the figure stood looking at them with distant eyes.

And no, this one doesn’t exactly have a happy ending either.

This one is also from The Martian Chronicles, and it’s the final story in that particular book. This is Bradbury at his poetic, poignant best. I can remember getting goosebumps when I read the ending the first time.

“I’ve always wanted to see a Martian,” said Michael. “Where are they, Dad? You promised.”

“There they are,” said Dad, and he shifted Michael on his shoulder and pointed straight down.

The Martians were there. Timothy began to shiver.

How swiftly a crowd comes… like the iris of an eye closing in out of nowhere.

Again, Bradbury picks something familiar: the way crowds tend to gather at the site of an accident. But they way he tells the story, we just know that there is something dark and terrifying happening beneath the surface.

This short story is included in Dark Carnival, and also The Stories of Ray Bradbury.

A rather macabre story that was included in The October Country. I’ll just quote the Wikipedia entry about it without spoiling it any further:

A man becomes convinced his skeleton is out to ruin him, and consults an unorthodox specialist.

I can vividly remember reading this story as a child: after all, a story that features a human baby that has accidentally been turned into a blue pyramid is bound to make an impression. It’s a whimsical story more than an ominous one, and probably the most light-hearted of the tales I’ve included in this list. It’s included in the anthology I Sing The Body Electric, and in a way, this one actually does have a happy ending.